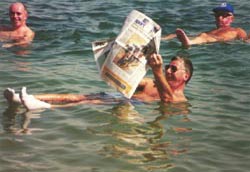 The Dead Sea could end up living up to its name in less than 50 years. The saltiest water body in the world may cease to exist if its surface level continues to recede at the present rate of one metre every year. In order to arrest this trend, Jordan has sought to revive cooperation with Israel on a project that would boost the receding water level of the sea. The plan envisages building a canal along the Jordanian-Israeli border, stretching from the Red Sea and cutting through the southern desert terrain to the Dead Sea, reveals Jordanian water expert Elias Salameh. The us $2 billion project would exploit the 400-metre altitude difference between the Gulf of Aqaba and the Dead Sea to desalinate seawater for the parched Jordan, he added.

Though both countries have established informal contact, most of the groundwork is being done through intermediaries.