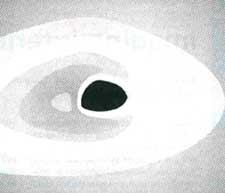 BLACK holes provide an excellent laboratory to test the theories of astrophysics and gravity. There is, however, one small hitch: it is not possible to "see" a black hole because its high gravity doesn't let light produced inside it to come out. A group of researchers has now come closest to actually observing one. Y Tanaka of the Institute of Space and Astronautical Science, Kanagawa, Japan, and others have recently reported evidence of the existence of an accretion disk - a disk of matter drawn towards a black hole.

A black hole is the extreme stage of gravitational collapse of a star. A star is constantly fighting a battle to "live". The gravitational force of the star tries to compress it. This is balanced by the pressure caused by the burning of nuclear fuel inside the star. For instance, our Sun uses the thermonuclear fusion of hydrogen to helium to produce energy and stall the gravitational pressure. But once the nuclear fuel is depleted, gravity takes over and @he star begins the final leg of its journey to "death" (Nature, Vol 375, No 6533).

Depending on how massive the star is, it could end up in a stable configuration of a white dwarf, a supernova or a neutron star. However, if the star is too massive, the collapse continues. The matter in the star gets compressed into a very small region of space and a black. hole is formed.

For instance, for a star of the mass of our Sun (whose diameter is about 1.39 million km), the "size" of the corresponding black hole would be about 1.5 krn across. The gravitational attraction of a black hole is so strong that it does not even allow light to escape. This is what gives rise to the name "black hole" which was coined by John A Wheeler.

This, however, does not mean that a black hole gives us no clues to its existence. Because of its strong gravity, it starts sucking up matter from neighbouring objects anPorms an accretion disk around itself. The radiation coming from the accretion disk can be observed and this is precisely what Tanaka and collaborators have reported.

Using the Japanese-American satellite ASCA, the group has observed the X- rays coming from the galaxy MCG-6-30- 15. The bright nucleus of the galaxy is believed to be powered by the gravitational energy of infalling matter into a black hole with a mass of more than a million times our Sun. As the gas nears the black hole, its velocity increases sharply to high figures (close to the velocity of light) where relativistic effects come into play.

These include the gravitational red-shift and a characteristic change in the radiation emitted. With the help of charge-coupled detectors, the group has observed these relativistic effects in the x-ray emission line (called K alpha) from ionised iron. The line is at a wave-length of 1.94 Angstrom (1 A is a hundredth millionth of a cm. Visible light is around 4000 A) and has all the features one expects of radiation coming from the innermost regions of the accretion disk around the black hole. The search for the existence of massive black holes has followed 2 parallel paths.

One is to try and observe the dynamic effects of these monstrous objects. The rotation (which depends on the mass in the galaxy) of nearby galaxies like Andromeda is observed and modeled using theoretical techniques. The starlight coming from these galaxies is also studied and the gravitational mass that cannot be accounted for by the starlight is attributed to the presence of black holes. Though the black hole itself is not "seen" in this method, it certainly allows us to infer its presence because of gravity.

Though some of the properties of the line observed by Tanaka and collaborators could in principle be explained by some other model instead of a black hole, it is difficult to understand the detailed properties of the spectrum by any other model. There is a good chance that we have ultimately seen objects which have until now only existed as theoretical conjectures.