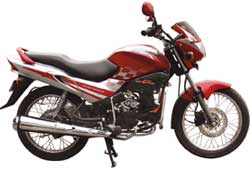 when the world is bidding for low emissions and high efficiency, any technology that does away with the carburettor in a two-wheeler is definitely going to rule the industry.

On June 26, Hero Honda, for the first time in India, launched the fuel injection (fi) technology in two-wheelers under the brand name Glamour fi. The motorcycle does not have a carburettor. Instead, fuel is directly delivered to the pre-combustion chamber with the help of a fuel injector. Experts say the process reduces emissions significantly and improves fuel efficiency.

"Till now, the technology has been used only in cars; it is for the first time that Hero Honda, with the help of Honda Motors Company, has introduced it in two-wheelers," says Brijmohan Lall, the chairperson of Hero Honda Motors. The launch is a significant development in the Indian two-wheeler market, given that the pricing of Glamour FI and Glamour carburettor are highly competitive.

The industry, however, is unfazed by this move of Hero Honda. Because, most of the Indian two-wheeler manufacturers, like the Bajaj Auto, tvs Motors and Yamaha Motors, are already prepared with the technology; it is only a matter of time before they formally launch the two-wheelers. On the very day Hero Honda announced the launch of Glamour fi, Bajaj Auto came out with advertisements in leading dailies announcing the impending launch of its 'Pulsar dts-fi' (digital twin spark-fuel injection), though with a bigger engine capacity than Glamour fi.

"Fuel injection is now going to be the future technology for all two-wheelers," says Lall. And given the number of two-wheelers that India purchases, the shift is imperative.

Let us look back: The conventional two-stroke two-wheelers were the worst polluters. Towards the end of 1990s, market gradually shifted its focus to four-stroke, improved in almost all parameters over the two-stroke, except the power. But as we move ahead, ensuring cleaner exhaust-gases and managing high fuel economy is a must and fuel injection technology precisely meets the requirement.

Glamour fi's distinctive feature is the Programmed Fuel Injection -- a computer-controlled electronic fuel injection system. It scans engine operating conditions through sensors (throttle position, engine operating temperature, intake air temperature, manifold absolute air pressure and crank angle) and sends data to the electronic control unit to inject an accurate amount of fuel as per the requirement. Unlike a carburetted engine, this regulated mixture of fuel and air leads to lower emissions. A need-based flow also results in the optimum utilisation of the fuel.

But technology does not stop here. Experts are already gearing up for another advanced method -- the direct injection technology, which will completely do away with the problems associated with the mixture of fuel and air.

How fast this technology can penetrate the Indian two-wheeler market remains to be seen. It was expected that once India introduced the Bharat Stage iii norms (2008) for the two and three wheelers, most of the two-wheeler manufacturers would move to fuel injection technology; otherwise it would be difficult for them to meet the stringent emission standards. But according to industry experts, carburettors are still in a position to meet the 2008-norms, which means, manufacturers will most probably avoid the technological shift, unless the market dynamics change the game.

"Over the years, the cost component of fuel injection technology has come down. With the entry of large players, it would further go down," says M N Muralikrishna, technical advisor of tvs Motors. But India may still not be able to adapt the technology due to the high gum content in petrol. "High gum content will block the fuel injectors, which are smaller than the conventional injectors used in cars," says Muralikrishna.

One can only wish that this time around the fuel quality does not hold back the fuel injection technology, just as it has hold back the Euro iv emissions standards for passenger vehicles in the country.