New one on the block 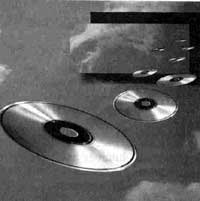 THE video cassette recorder (VCR) may never achieve the historical status of the steam engine, printing press or the PC, but there is no denying that it is one of the great inventions of the 20th century. Since the VCR's introduction in 1975, more than 520 million have been sold worldwide.

But now a new home-entertainment machine threatens to take the VCRs place. Called a digital video disc player (DVD), the latest black box functions like a combination audio CD player and VCR, it plays standard-sin CDs containing high-resolution movies and digital sound. Analysts, say that the new video format has a bright future as a replacement for VCRs and videotapes - and as the successor to CD-ROm drives that have been spurring sales of home PCs. DVD technology will be a key to the expanding multimedia world.

Major consumer-electronics companies will be unveiling DVD players in Japan and North America in the next few weeks. Initially, DVD players will sell for at least US $500. Discs will cost us $30 to $50 each. The price of both the hardware and software will fall if and when sales grow. DVD units will play only fpovies at first - they won't be able to record TV shows or anything else until 1998, when 'writable' (that is, recordable) discs hit the market. This defiLlency will save the VCR for a while. Experts think recordable discs will find a Wide audience, perhaps first with PC owners, who will use them to store data from the World Wide Web.

Digital DVD video discs offer some powerful advantages over video tapes and conventional CDS. As a medium for playing movies, DVD discs are smaller and easier to handle than tapes, and offer nearly instant access to material. As with audio CDs, users can fly over (fast-forward) DVD video segments they do not like. First- generation DVD discs will store 133 minutes of video on one side. Over the next few years, their capacity will double and then quadruple. With more space, content providers could store multiple versions of the same film on a disc.

Film studios are expected to reap big profits from the new format. DVD discs will be inexpensive to make, affording movie makers the opportunity to squeeze hefty margins out of new and existing entertainment titles. The replication cost for a DVD disc will be half the cost of producing a videotape.

DVD will also enhance computer applications. The discs store seven times more data than existing CDs, and new disc drives will read that information faster. Pc makers are already thinking of building DVD-ROm drives into some of their computers; they are looking at DvD as an alternative to the CD-ROMs. The new format will bring Pcs in line with where the broadcast industry is going, that is, it will give them compatibility.