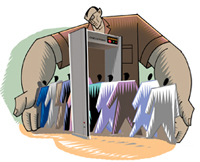 the need for a national policy on the voluntary sector has been debated in public circles for close to 20 years. The matter seemed to have been sealed with the Union cabinet approving a policy on May 17, 2007. "Creating an environment for the Voluntary Organisations (vos) in order to stimulate their effectiveness," is among its stated aims. But the policy has evoked mixed response from its target group a few voluntary groups hold that it will strengthen government control over them, while some others see the policy as the first step towards government recognition of their role in developmental activities. The reaction is not surprising considering the policy targets a vast and diverse group including ngos, community-based organisations and charities. "There are 12 lakh vo s in India, 53 per cent of which work in rural areas.The sector is growing at between 10 and 15 per cent annually," notes the Voluntary Action Network of India (vani), a lobby group representing 2,400 ngos.

The approved policy is a reworked version of a draft circulated in 2003. Between 2003 and 2007, the government carried out a series of consultations with voluntary groups to finalise the policy.


The document's key points deal with accountability and transparency in voluntary sector governance. It recognises the sector as a key agency for development, and as a critical watchdog of the government. It notes, for example, "The independence of vos allows them to explore alternative paradigms of development to challenge...forces that may work against public interest and to find new ways to combat poverty, deprivation...It is therefore crucial that all laws...and regulations...categorically safeguard their autonomy, while simultaneously ensuring their accountability."

But there is also a call for self-regulation, transparency and accountability. The policy recommends a regulatory body for the voluntary sector. Some ngo representatives see these recommendations in a positive light. "We welcome the obligations placed on ngos to improve their governance. The government has finally given us the recognition we always demanded," says Pooran C Pandey, ceo of vani.

He, however, believes that the policy has just set the ball rolling, and its real test lies in implementation. Many like R Sreedhar, managing trustee, Environics, an ngo working in Uttarakhand, agree. "The policy statement is just a beginning, and it remains to be seen if the promises materialise," says Sreedhar.

Many groups, however, are not that optimistic. They see the self-regulation clause as an indirect way of extending government control over ngos. Ravindernath, who works with the Rural Volunteers Centre in Assam, for example, says that, "Rather than ask ngos to regulate themselves, the policy should emphasise transparency in the implementation of laws pertaining to the voluntary sector."

Many groups have criticised the idea of a voluntary sector regulator, saying that the diverse character of the sector militates against an uniform authority. "Even the industry does not have a uniform regulatory mechanism. What holds for large multinationals does not apply to small operators," says Rajesh Tandon, head of the Delhi-based ngo, Head of the Society for Participatory Research Institute in Asia (pria).

Registration procedures for non-profit organisations have been simplified. There will be another set of laws to ensure that voluntary organisations working in a non-formal manner get themselves registered.

But what exactly is a vo? That's a contentious issue and the government has played safe with a broad definition. Organisations that undertake public service on ethical, cultural, social, economic, political, religious or scientific impulses are deemed as vos. The categorisation includes formal and non-formal groups, networks and federation.

The definition in the 2003 draft policy evoked much criticism, with many voluntary groups decrying it as ambiguous. Voluntary activity--one undertaken for the benefit of others without any personal, financial or material returns--was the defining feature of the voluntary sector, according to the 2003 policy. But according to Tandon, this proved a misnomer as organisations have gone beyond the scope of mere volunteerism.

The definition also led to inaccurate estimates of the number of ngos operating in India. Explains Wilfred D'costa, general secretary of Indian Social Action Forum, a national network of people's organisations, "Volunteerism, in its strictest sense, is almost dead in India. Even today, the minuscule minority of voluntary groups is outside the ambit of this policy as they are either unregistered or are not recipients of government funding."


Funds received by vos are often cause for controversy. The policy proposes a regulatory mechanism at the national level, and seeks transparency in management of funds received from various sources including the government and foreign entities.

The policy proposes continuing the fiscal concessions to the voluntary sector and suggests that the government streamline the system for granting tax exemption to charitable projects under the Income Tax Act.

Not all are impressed by these concessions. Gururaja Budhia of Urban Research Centre, a Bangalore-based ngo, for example is sceptical about giving tax exemption to companies donating shares to the voluntary sector. "It is an effort to convert public service into service delivery. The policy seeks to define development in terms of what suits the private sector," he says.


The policy promises to simplify provisions related to the Foreign Contribution and Regulation Act (fcra), 1976, which regulates the inflow of funds from foreign agencies to the voluntary sector. An amendment in 1985 stipulated all vos receiving foreign funds must register with the home ministry, which would monitor the funds.

fcra also empowers the state to stop an organisation from receiving foreign contributions if it perceives that political strings are attached to the aid. vos have always regarded the act as regressive, and matters came to a head when the government introduced amendments to fcra through the Foreign Contribution (Regulations) Bill, 2006.The bill proposed an increase in the Union governments powers specially when it came to scrutinising foreign funding. Several vos objected, and the bill was referred to a Parliamentary Standing Committee on Home Affairs.

"When the government is formulating a law for voluntary sector, stringent norms proposed by amendments to fcra are not progressive," says Tandon. The new policy does little to mend matters. "It says fcra will be reviewed. The policy should have done more to address concerns expressed during the debates on the Foreign Contribution Regulation Bill," says Ravindernath.