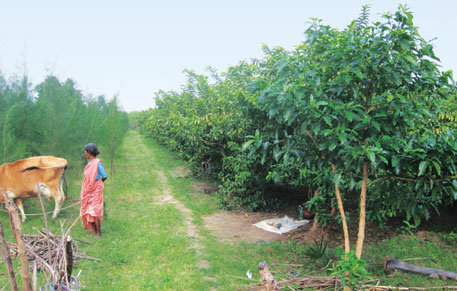 AFTER becoming the first country in the world to frame an agroforestry policy, India has gone ahead and allocated Rs 444 crore to promote agroforestry in the country. The National Agroforestry Policy 2014, announced on February 10, has the potential to substantially reduce poverty in rural India and revive agroforestry industry.

Agroforestry is a farming practice in which trees, crops and fodder are grown together on a farmland. Over 80 per cent farmers in India are small land-holders (owning less than two hectares). “Agroforestry will increase biodiversity in small farmlands, which will help mitigate climate change and improve the quality of soil. Also, as land-holding size is shrinking, combining tree farming with agriculture is the only way to optimise farm productivity,” says Ashish Mondol, a national advisory council member who steered the committee for drafting the agroforestry policy.

Farmers in India have been doing agroforestry since ages in the form of homegarden where fruit trees and woody plants are grown together. The practice has seen a sharp decline in the past few decades, primarily because of strict laws and lack of incentives to small farmers. The policy will try to reverse this trend by relaxing laws and providing loans and insurances to farmers.

India has been meeting its growing demand for agroforestry products such as plywood, timber, pulp and paper through imports, while the domestic industries have been under-performing. According to the National Research Centre for Agroforestry (NCRA), the country imported six million cubic metres of timber and round logs and spent Rs 18,000 crore last year.

NCRA data suggests India has 23,220 saw mills, 2,562 large and small plywood mills, 660 pulp and paper mills. “These wood-based industries are producing only 40 per cent of their total capacity because more than 70 per cent of wood industries are small, which are dependent on wood from small farmers who are not encouraged to produce,” says S K Dhyani, director, NCRA, Jhansi. He adds that the policy might change this trend. Small farmers are not practising agroforestry primarily because of unfavourable regulation of felling and transporting of farm grown trees, such as section 41 of Indian Forest Act. The section restricts felling and transportation of trees grown even on private farmland, especially those species which are found in the nearby forests. The new policy talks of uniform laws for harvesting and transportation of farm grown trees across states.

The sector, unlike the agriculture sector, lacks institutional insurance facility. The policy for the first time promises risk coverage to farmers practicing agroforestry against theft and natural calamities such as cyclone, storm, floods and drought. The farmers will also be provided soft loans for growing trees that have a long gestation period before they can be cut.

Government estimates suggest that the policy will help increase the area under agroforestry from 25.32 million hectares to 53 million ha. “The policy will enable farmers to reap the benefit of agroforestry and help meet the country’s demand for food, fodder, firewood and timber,” Dhyani says.

Agroforestry can also help reduce unemployment by creating job opportunities for chopping and transporting of trees. “As per estimates, 64 per cent of our timber requirement is met through trees grown on farms which generate employment for 450 people per day (450 employment-days) per hectare per year,” says Mondol.

The policy also calls for setting up a board to coordinate the various agroforestry initiatives undertaken by different ministries. Government estimates suggest the rural development, agriculture and forest ministries are currently spending close to Rs 4,000 crore on different schemes related to agroforestry.

The policy can also help the government implement the ambitious National Food Security Act, 2013, which makes it a legal obligation for the government to provide food to more than 800 million of the country’s population. “Agroforestry alone can increase agricultural production in a sustainable manner,” says Mondol.