But will it reflect true level of poverty in the country? 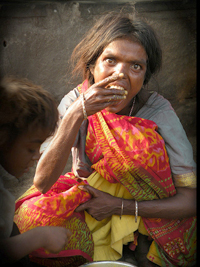 There is already a new National Sample Survey Organisation (NSSO) survey underway to bring out an “accurate” poverty estimate because the base year for the just released poverty estimate, 2009-10, was a drought year.  It thus did not reflect the true economic situation of people.

On March 19, the Planning Commission brought out the poverty figures of 2009-10 based on the NSSO's consumption-expenditure survey. This, as a practice also set rural, urban and overall national poverty lines. According to this assessment of poverty, using the Suresh Tendulkar Committee methodology, the new poverty line is Rs 29 per day per person in urban areas and Rs 22 per day per person in rural areas. The last poverty estimate done in 2007 had set Rs 12 and Rs 18 per person per day as the rural and urban poverty lines respectively.

Eight states, the usually poor ones–Andhra Pradesh, Bihar, Chhattisgarh, Jharkhand, Madhya Pradesh, Odisha, Rajasthan and Uttar Pradesh–account for 65.5 per cent of country's total poor. Uttar Pradesh has the country's largest number of poor while Bihar is the poorest state in the country. In the last survey, Odisha, was the poorest state. In the past five years 52.5 million people have moved out of poverty.  Bihar and seven other states have also reported increase in poverty level. The states include Assam, Chhattisgarh, Manipur, Meghalaya, Mizoram, Manipur and Delhi. They have together added 10 million poor to the country. (See table: States that have more poor now).

Despite a clear commitment in a joint statement by the Planning Commission and the Union rural development ministry in September 2011 that poverty line would not be used for deciding entitlement for development programmes, the debate has resurfaced. Parliament also debated unannounced on this. Within 48 hours, the Planning Commission deputy chairperson, Montek Singh Ahluwalia, clarified. He attributed the faulty primary data for underestimated data and promised that the line will not be used for entitlements.

“The Tendulkar poverty line has been criticised on the grounds that it is too low and underestimates the scale of the population that needs special assistance. Any poverty line is arbitrary essentially and the Planning Commission has only accepted the line recommended by the Tendulkar Committee. We have also indicated that the line will be revised from time-to-time based on the recommendations of experts,” says Ahluwalia. “There should not be any concern that the poverty estimate will define entitlements,” Ahluwalia notes.

“Earlier, the NSSO data used to cover around 80 per cent of the consumption captured by national accounts. However, the discrepancy has constantly widened and it is too high now,” Ahluwalia explains, “This is probably affecting the poverty data. The consumption expenditure is being understated.”