New process to minimise chemical, energy use in making leather 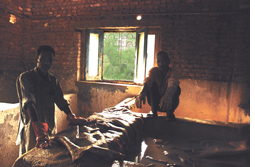 conventional leather production consumes high levels of energy and a number of chemicals. The process releases toxic substances. Scientists from Tamil Nadu have developed an enzyme-based technology which minimises all these.

The Central Leather Research Institute (clri) in Chennai says it has evolved a process which cuts down use and release of chemicals by 82 per cent. It has done so by avoiding two key process in leather production, deliming and acidification and saves nearly 40 per cent of energy.
Leather production has three stages; pre-tanning, tanning and post-tanning. In the clri method chemicals--mainly chromium--are used during tanning. But in the other two stages their use is very minimal.

For instance, the conventional production method uses lime in treating the hide before tanning, while the new method uses an enzyme--alpha amylase. This helps in avoiding the generation of sledge. The action of the enzyme is made faster with the chemical sodium metasilicate.

Enzymes are also used for soaking, dehairing and softening the leather. The enzymes and catalyst used are significantly lesser in quantity--about 2 per cent of the product.

Earlier, the amount of chemicals used was higher--about 40 per cent of the product. "Our method involves salt-free curing, lime and sulphide-free processes, and post-tanning followed by tanning employing what is called a reverse processing technique," says Raghav Rao, lead author of the study which was published online on October 5, 2007, in the Journal of Chemical Technology and Biotechnology.

In the new processing, pre-tanning is not immediately followed by post tanning. Tanning is done only at the final stage, he explains.


This process can save more than Rs 2,000 for processing one tonne of raw skin. The Southern Petrochemical Industrial Corporation (spic), Chennai, which is developing the new technology with clri , is promoting it among tannery units in India. "The project was completed in April, 2007. We demonstrated the method at the All China Leather Exhibition at Chennai in September, 2007, and got a good response," says G Sivaraman, chief manager of the biotech unit of spic. He admits that the enzymes used in the new method are costly. But the time and energy which can be saved by using the new method will compensate. The new method is 8 to 10 per cent more efficient than the traditional method.

Rao says the technology will be appropriate for large-scale units; may not be economical for small units. "The process--timely application of enzymes, for example--should be effectively controlled, which is usually not the case in small-scale units," he says.

Even then many small-scale units have still expressed interest in the method. "If it has been commercially tried out, we will use it. The enzyme also needs to be locally available," says Joginder Walia of the Society for Technology Development (std), which runs a village-based leather processing unit in Mandi, Himachal Pradesh.

If the technology is modified to suit to the demands of small units, it could help many small leather production units which are facing extinction. Joginder's unit for example, once used a vegetable tanning technology developed by clri in 1995. Due to a fall the demand for vegetable tanned leather, they had to shift to partially chrome-tanned leather. Natural tanning units were common in small towns. But with small towns having access to chemical tanning, these tanning units face threat.

But there is hope for them. Sivaraman says spic is promoting the technology among all sizes of tanning units. "But how confidently the units can take up our technology will depend on their awareness levels. They also need to adopt eco-friendly technologies. We will also be making the enzymes available all over India," he assures.