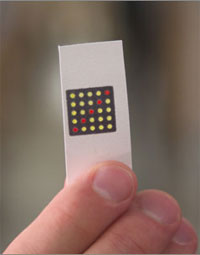 One of the major problems in global fight against Ebola is the huge cost and health infrastructure requirements associated with its detection. But results of some new researches claim to have produced substitutes to cumbersome and expensive methods.

A new prototype paper test developed by the team of Jim Collins, a scientist at of the Wyss Institute for Biologically Inspired Engineering at Harvard University in Boston, Massachusetts, can help conduct Ebola tests at a cost of nearly US $20. The test, according to New York Times, can otherwise cost US $60 to US $200 each and take about six hours. According to a BBC report, the technique comprises of a DNA-programmed blotting paper and uses a soup of biological ingredients including the genetic material RNA (ribonucleic acid). This is being seen as a simple and cheap method to identify infected people.

According to New Scientist, the key to the technology is the ability to print sequences of DNA on paper, then freeze-dry and store the discs at room temperature. The DNA is reactivated by adding water. Once active, it enables the paper to change colour if a chosen target–such as a segment of Ebola viral RNA – is present in the water.

"We're extending the concept of litmus paper to biochemical reactions, putting the power of molecular biology onto paper," says Collins. “Synthetic gene networks have wide-ranging uses in reprogramming and rewiring organisms. To date, there has not been a way to harness the vast potential of these networks beyond the constraints of a laboratory or in vivo environment,” says his research.

Another shoebox-sized battery-operated prototype, known as the single particle interferometric reflectance imaging sensor (SP-IRIS), detects pathogens by shining light from multicolor LED sources on viral nanoparticles bound to the sensor surface by a coating of virus-specific antibodies. The diagnostic device, according to futurity.org, was developed by a team led by Selim Ünlü, a professor of biomedical engineering at Boston University, in collaboration with other researchers, and was published in journal ACS Nano in May this year.

Outbreak News Today had recently published a report where clinical professor Udom Kachintorn claimed that the World Health Organization (WHO) had taken note of an Ebola therapy developed at Mahidol University in Bangkok, Thailand. The researchers have a developed a therapeutic antibody prototype from human cells that can eliminate Ebola virus for the first time in the world. The prototype is yet to be tested with real virus in the US.

Crisis may set back malaria fight

Meanwhile, the experts across the world are worried that the global fight against Ebola could thwart efforts to contain malaria in the region. “More kids are dying of malaria in these three countries now than they were before Ebola came along. So it would be worth stopping the Ebola epidemic if the only benefit was that it put the health system back in place,” Bill Gates tells Guardian.

Till now, more than 4,900 Ebola deaths have been reported this year during the current epidemic, mostly in Guinea, Liberia and Sierra Leone.

A dead-end host: is there a way out? A position piece on the Ebola virus outbreak by the International Union of Immunology Societies

The economic impact of the 2014 Ebola epidemic: short and medium term estimates for West Africa