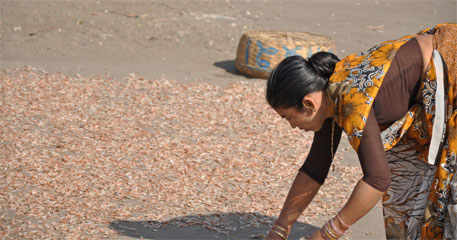 A new Food and Agriculture Organization (FAO) report shows that though women make up nearly half of all people in the fisheries sector, they often do not get their dues.

Women's access to resources and opportunities also remains limited and they are not adequately represented in leadership positions. Globefish is a unit in FAO fisheries responsible for information on the international fish trade.

The study acknowledges that data on the role of women is scarce, and even if available, they are of poor quality, not covering all the sections adequately.

Of the six countries studied in the FAO report (Croatia, India, Iceland, Egypt, France and Senegal), only “Iceland collects gender disaggregated data over the full employment spectrum in the seafood industry”, the study says.

It, however, says that developing nations such as India and Senegal offer rather good records because these nations have received the attention of gender sensitive development aid agencies.

Capture fisheries, aquaculture and post-capture activities support over 120 million people worldwide. Fish are an important source of nutrition and provide more than 20 per cent of animal protein in low-income nations, the report reads.

How are women affected?

On an average, 47 per cent of the 120 million people who work in the capture fisheries and post-harvest sectors are women. But globalisation of markets, stagnating catches and climate change are putting extra pressure on them.

Women entrepreneurs often lack access to resources like processing technology and storage facilities, according to the report.

While men continue to dominate offshore and industrial fishing, women are relegated to processing, local sale, cleaning boats and bringing fish to markets, the report says. These roles fetch low wages for women.

While future growth of the fisheries industry is expected to come from fish farming, women who want to enter fish production in developing countries still lack rights to own a boat or land.

Limited access to loans often prevents women from starting or upgrading their own businesses. The problem of gender equality is not limited only to small-scale fisheries in developing countries. It is also reflected in the relative absence of women in board rooms, executive positions and fisheries conferences. Of the world’s top 100 seafood companies, only one is run by a woman as chief executive officer, a report says.