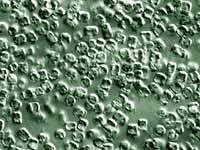 cadmium, a toxic metal often used in batteries, has for the first time been found to have a biological use -- as a nutrient that is used by plankton in the ocean. Scientists discovered the metal in an enzyme from a marine diatom, which is an algae or plankton common in the ocean and a major source of food for many organisms (Nature, May 5, Vol 435, No 7038).

The finding suggests other trace metals found in the ocean may also be used in enzymes secreted by sea creatures. This could play an important role in the cycling of trace metals in seawater, which in turn has implications for global carbon cycling and climate change.

Over the past few decades, the importance of zinc as a micronutrient has become apparent in terrestrial life, but its scarcity in the oceans likely created the need for a cadmium enzyme that performs the same function, according to Mak Saito of the Marine Chemistry and Geochemistry Department of the Woods Hole Oceanographic Institution in the us, a co-author of the study. The enzyme is a common protein that regulates carbon dioxide levels in the cell. Marine diatoms can use cadmium, cobalt or zinc interchangeably for optimal growth, but this is the first use of an enzyme from a marine diatom that carries cadmium in its metal-binding site in native form.

The scientists studied the diatoms Thalassiosira weissflogii and Thalassiosira psuedonana, purifying and sequencing a protein in the single-celled organisms that contains cadmium. Mapping of the oceanic dna is being carried out to find more genes from this unique acquatic environment.

Saito says the oceans might be an important reservoir of novel genomic material because of the unusual chemistry of the surface waters. Besides scientists from whoi, the team included researchers from the Sandia National Laboratories, University of Saskatchewan, the Exxon Mobil Research and Engineering Corporation, and the Princeton University.