Changes outside the genetic material can last generations 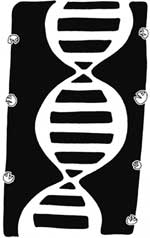 a new study could drastically change our understanding of how diseases are passed from one generation to the next. Conducted by the Washington State University, Pullman, usa, it offers a fantastic explanation obviating genetics.

The researchers, led by M K Skinner, injected pregnant rats with two common chemicals -- vinclozolin (a fungicide used in vineyards) and methoxychlor (a pesticide) -- that disrupt the functioning of reproductive hormones. Two dosages of the chemicals were used, calculated at the rate of 100 mg and 200 mg per kg weight of the rats. The injections were given daily for a week, starting from the eighth day after fertilisation. This is the time when the sex of the offspring is determined and the genetic material gets reprogrammed through methylation -- a natural process of methyl groups (combinations of one carbon and three hydrogen atoms) attaching to the genetic material. Methylation triggers gene expression and is called an epigenetic change, as the genetic material remains unaltered. Four generations of the rats were observed. The results were compared with control generations of pregnant rats that were not exposed to the chemicals.

The group found all the male offspring of the exposed rats in all the generations observed were affected. Ten per cent of the males born turned out to be infertile while the rest produced defective sperm cells. Even when exposed males mated with control females, the male progeny produced sperm cells less (than controls) in number and showing low motility. The exposure affected only males; when exposed females were bred with unexposed males, the progeny was normal.

The scientists ruled out a genetic mutation, which would have affected just one per cent of the males. Instead, the authors attributed the results to methylation being affected by the chemicals. They proposed the chemicals permanently reprogrammed the sperm and this could pass the disease to subsequent generations. They tested this hypothesis by studying sections of the genetic material showing changes in methylation that were passed on to the next generation. The scientists found two genes with altered methylation that could be responsible for the sperm cell defects observed.

The results have put the scientific community in a tizzy. "These data are highly significant and make sense because we have known for several years now that germ cells (sperms and eggs) go through methylation/demethylation events and that these events are very important for silencing certain genes. There are numerous human diseases that are going to be re-examined in the light of the epigenetic discovery," says Rex A Hess, professor, veterinary biosciences, University of Illinois, Urbana. For instance, epigenetics may explain the effect of diethylstilbestrol (des), a powerful synthetic oestrogen drug given to women to prevent miscarriage during the 1950s-1970s. The female foetuses exposed to des were found to have significant reproductive and other problems. The problems also appeared in the subsequent generation (granddaughters of the women exposed). "The whole understanding of epigenetic changes and how that regulates gene transcription is a field that has been advancing rapidly, but people just have not thought much about environmental compounds inducing these changes," remarks Paul Cooke, of the same university.

The study raises questions on how much of what occurs in biology and evolution can be accounted for by the environment. A theory proposed by Jean Baptiste Lamarck emphasising the role of environment in evolution was rejected in the 1800s over Charles Darwin's theory in which mutations play the major role. "Lamarck did not have science to back him up but now science may actually support at least some of his hypotheses," says Hess. More studies are needed to find out whether environmental chemicals cause epigenetic changes at dosages that are present in the environment, whether they are permanent and whether the chemicals have the same effects on humans. The group is now studying the effect of exposure on other diseases and in bigger animals.

"Skinner doesn't actually demonstrate any epigenetic effect, he surmises this is the mechanism. This study certainly increases interest in environmental disruptors which have been widely implicated in reproductive dysfunction but is really a preliminary study which needs to be elaborated on," says Richard Anderson, programme leader, Medical Research Council Human Reproductive Sciences Unit, Edinburgh, uk.