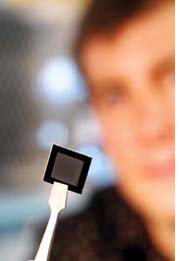 a new solar panel unveiled by Georgia Tech Research Institute in Atlanta in April 2007 promises to produce about 60 times more electricity than traditional solar cells. The new cells are smaller and less complex.

Conventional flat solar cells reflect a significant portion of the light that hits them, reducing the amount of energy absorbed. But these new three-dimensional solar cells capture nearly all the light striking them using an array of nano towers--structures that resemble high-rise buildings in a city grid. These towers can trap and absorb light received from many different angles, even when the sun is not directly overhead, and can thus boost the efficiency of photovoltaic systems.

"Our goal is to harvest every last photon available to our cells," says Jud Ready, a senior research engineer at the institute's Electro-Optical Systems Laboratory who invented the panels. "By capturing more of the light in our 3d structures, we can use much smaller photovoltaic arrays. On a satellite or other spacecraft, that would mean less weight and occupy less space."