The fossil is from the Scottish Isle of Skye, one of the few places in the world where fossils from the Middle Jurassic Period can be found 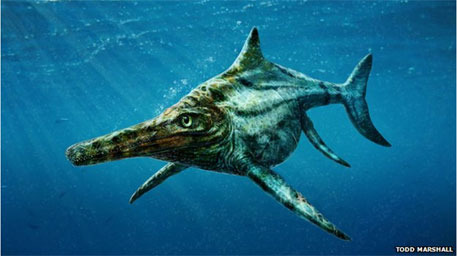 Scottish scientists have identified a new species of reptile that lived at the same time as the dinosaurs, various media outlets reported recently.

The fossil of the shark-like reptile that lived 170 million years ago was first discovered lying on a beach on the Isle of Skye in Scotland, in 1959, by an amateur collector but has only now been recognised as a new species of ichthyosaur, a report in British daily The Independent said.

Ichthyosaurs are an extinct group of marine reptiles that dominated the oceans of the Jurassic Period.

The reptile has been named ‘Dearcmhara shawcrossi’, after Brian Shawcross, the amateur collector who donated the specimen to Glasgow’s Hunterian Museum, and the Gaelic word for marine lizard, dearcmhara – pronounced “jark vara”.

The Independent report quoted Steve Brusatte, of the University of Edinburgh's School of GeoSciences, who led the study, as saying: “During the time of the dinosaurs, the waters of Scotland were prowled by big reptiles the size of motor boats. Their fossils are very rare, and only now for the first time we’ve found a new species that was uniquely Scottish.”

“It looked particularly peculiar to us and when we compared it to other fossils it was clear that it was a different ichthyosaur to anything that we had been seen before. It’s not the most beautiful fossil in the world but we realised it was an unusual specimen,” he added.

The reptile measured about 14 feet long from snout to tail and was armed with an array of sharp teeth. It lived in seas off Scotland and fed on fish and possibly smaller reptiles.

Brusatte said that the Isle of Skye, where the fossil was found, was one of the few places in the world for finding fossils of creatures that lived during the middle of the Jurassic Period, between 160 million years and 170 million years ago. “It’s a real treasure because the fossils on Skye come from a time during the Jurassic when we don’t have fossils from the rest of the world. By pure, dumb luck, it gives us a window into this mysterious period of time.”