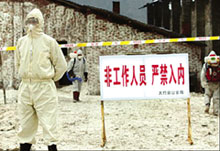 SCIENTISTS have discovered a new strain of the h5n1 avian flu virus that appears to have become resistant to current vaccines. The discovery by Y Guan of the University of Hong Kong and colleagues was published online in the Proceedings of the National Academy of Sciences (10.1073/pnas. 0608157103, October 30, 2006).

The new strain of h5n1 was first identified in Fujian province in May 2005, and became dominant in southern China in early 2006. "This strain may have begun the third wave of transmission of h5n1 avian flu and could potentially spread throughout Eurasia," say the researchers. It is responsible for recent human h5n1 infections in China and has already spread among poultry in Hong Kong, Laos, Malaysia and Thailand, notes the report.The virus became increasingly dominant over other h5n1 strains, between July- September 2005 and April-June 2006. Researchers thus suggest that the predominance of the new virus strain within a short period directly challenges current disease control measures.