New units banned in 8 industrial areas; ban lifted from 10 others

The Union Ministry of Environment and Forests (MoEF) has imposed a moratorium banning new industries in eight industrial clusters after a survey showed high pollution levels in these areas. These are the areas where a moratorium was imposed earlier but lifted subsequently on the basis of action plans submitted by state pollution control boards. The ministry has, meanwhile, lifted its ban on expansion on 10 industrial clusters.

The two decisions are based on the revised Comprehensive Environmental Pollution Index (CEPI) score prepared by the Central Pollution Control Board (CPCB). The CEPI score is a measure of pollution of industrial areas after taking into account the source, magnitude and scale of pollution; the number of people affected and pollution control measures in place.

The CEPI scores indicated increasing pollution trends in Ghaziabad (Uttar Pradesh or UP), Panipat (Haryana), Singrauli (UP and Madhya Pradesh), Vapi (Gujarat), Indore, (MP), Jharsuguda (Odisha), Ludhiana (Punjab) and Patancheru-Ballaram (Andhra Pradesh). Hence the moratorium was reimposed in these areas indefinitely (see table). The action plans executed in the past two and half years in these areas have been ineffective, according to the office memorandum of the ministry. 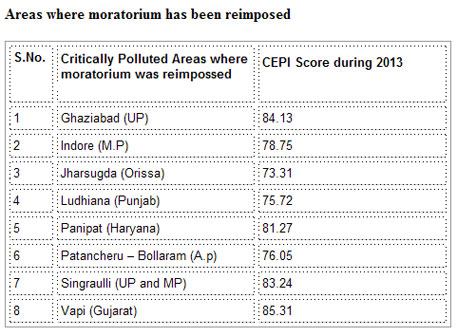 In 2009, CPCB had evaluated the performance of 88 industrial clusters of the country and ranked them on the basis of the CEPI score card. Following this exercise, a moratorium was imposed by MoEF, banning any new industries or expansion in the top 43 polluting industrial areas. The ministry at that time specified that the moratorium would be lifted if the respective state pollution control boards (SPCBs) furnish time-targeted action plans to improve quality of the environment.

Subsequently, different SPCBs started submitting action plans from time to time, based on which the ministry lifted moratorium from 26 industrial clusters over  a period. In the remaining 17 clusters, the moratorium was extended up to March 12, 2013 and thereafter it was extended till further orders. The eight industrial clusters where moratorium has been reimposed are among the 26 areas where moratorium was lifted. The ministry order has said that except for highway, common effluent treatment and municipal solid waste project, no other large polluting projects like thermal power plants, coal mines would be allowed in these critically polluted clusters.  Modernization of the existing industries in these areas would be allowed, but the pollution load is expected to remain the same if not decrease. 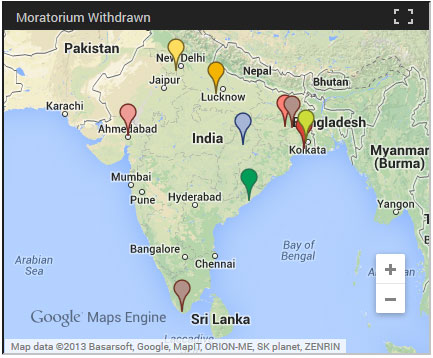 The seven (out of 17) industrial clusters where moratorium will continue are: Ankleshwar (Maharashtra), Chandrapur (Maharashtra), Pali (Rajasthan), Vatva (Gujarat), Vellore (Tamil Nadu), Najafgarh Drain Basin (UT Delhi) and Jodhpur (Rajasthan). These are areas that have been given CEPI score of above 70 and show either increasing trend or no change as compared to values observed in 2011.

There has been a lot of criticism earlier over the mitigation action plans submitted by SPCBs based on which moratoriums were lifted. Analysis by the Centre for Science and Environment (CSE), a non-profit based in Delhi, in 2011 showed that the projections in the Tamil Nadu Pollution Control Board’s mitigation action plan in Cuddalore are misleading. Similarly, high mercury levels in human samples in one of the critically polluted industrial area Singrauli was brought out by CSE in October this year