New York gets US $350 million to check congestion 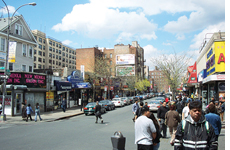 new York mayor Michael R Bloomberg announced recently that the federal department of transport had awarded more than us $350 million to New York to implement the mayor's alternative plan to reduce traffic congestion.

With the us $350 million, New York plans to modernise mass transit and improve quality of air, besides controlling congestion (see graph: Dollars to decongest). According to Bloomberg, "This is a major victory for the people of New York city...by fulfilling the terms of the agreement, we will be able to create new and better mass transit options for commuters all across the city." Under the congestion-pricing scheme, cars will be charged us $8 during weekdays between 6 am and 6 pm to enter Manhattan below 86th Street. 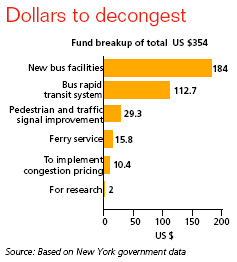 In cities like Delhi, cars and two-wheelers occupy more than 90 per cent of the road space and pollute heavily; they meet a very small share of the travel demand. The crawling speeds on roads imposes huge costs. Estimates in India show that congestion on Indian roads means a loss of Rs 3,000-4,000 crore every year.
Such programmes have also been implemented in London, Stockholm and Singapore, where motorists are charged a fee to drive into dense-traffic areas.