Argentinean ranchers are selling the semen of their bulls instead of sending them to the slaughterhouse.

They have turned to their centuries-old cattlebreeding tradition to meet the growing global demand for beef, embryos and genetics know-how. Argentina’s beef is much in demand. The semen of bulls is collected in plastic containers. Once it has passed quality checks, the semen is diluted to make up to 300 doses that are kept in liquid nitrogen. Breeders say exports to Brazil, Bolivia, Uruguay and Paraguay have surged in recent years because of South America’s strong economic growth. 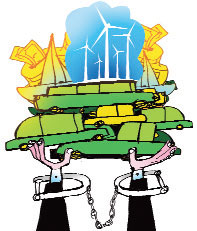 Italian police seized a record US$1.9 billion in assets linked to the Sicilian Mafia. Among the confiscated luxury cars and financial investments were 43 companies involved in wind and solar energy production. The centre of the sting was a businessman, who has vast holdings in alternative energy concerns. He allegedly has ties with a top Mafia boss.

Investigators said wind farms had become favoured vehicles for laundering money made from drug trafficking and other rackets. Throughout Italy, organised crime has invested heavily in renewable energies and in waste processing, and is cashing in on subsidies provided by the state and the European Union.

Greenland has partially changed a decades-old ban on uranium mining. The amendment allows exploration of radioactive elements, like uranium and thorium. The change is a reversal to the zero-tolerance policy that was instituted in the 1980s. The ban’s removal will benefit a mining company, based in Australia, which owns 61 per cent of the uranium-rare earth deposit Kvanefjeld in southwest Greenland. The decision will allow it to develop a mine plan for uranium, zinc and rare earth elements at the Kvanefjeld deposit. However, this does not mean the explorers have permission to mine radioactive materials.

Data is insufficient to determine that genetically modified salmon is safe for consumption, a US health watchdog said. Last month, a panel of the Food and Drug Administration had given the altered fish thumbs up, saying it was safe. An advisory panel of the watchdog now said the government should analyse the fish’s possible effects on environment and health more rigorously.

The environmental concern is that the altered fish will escape and breed with wild salmon. The earlier panel had said since the GM salmon is sterile it won’t reproduce with fish in nature.

BP has capped the broken well that triggered the worst oil spill in the US history. After five months of struggle, the ruptured Macondo well was permanentaly plugged with a shot of cement. It had gushed 4.9 million barrels of oil into the Gulf of Mexico. The company has spent US$8 billion since the Deepwater Horizon rig exploded on April 20, killing 11 people.

The government has opened 21,000 sq km of the Gulf of Mexico for fishing, which is 20 percent of the federal waters that had remained closed due to oiling concerns.

A new type of rock on the lunar surface has been revealed. Scientists say it was spat up by a never-seen-before volcano on the moon. Until now, it was believed that the moon was made of two basic types of rock—dark basalt and light, calcium- rich feldspar. But data from NASA’s Lunar Reconnaissance Orbiter showed the new volcano oozed thicker lava rich in silica over a light, arrowhead- shaped patch of the moon roughly 30 km across.

The finding has helped in creating the first-ever comprehensive catalog of large craters on the moon. Lunar Reconnaissance Orbiter took off in 2009.