For the first time since 2002 dredging has stopped at the Murray river mouth in south Australia. Rains across the Murray-Darling Basin, one of the world’s largest river systems, improved water flow down the country’s longest river with an estimated 48,000 megalitres passing through the mouth each day.

Dams, irrigation and droughts between 2000 and 2007 had made the river dry and saline.

Since 2002, more than 6.5 million tonnes of sand has been removed from the mouth to ensure continued exchange of water between the southern Indian ocean and the Coorong, a lagoon ecosystem.

A 2005 study showed that flowering plant Ruppia tuberosa, which sustains the Coorong had been killed in some parts of the ecosystem due to reduced freshwater flow from the river. This also resulted in extinction of several species of fish.

A clash erupted in Easter Island of Chile after the government sent troops to evacuate indigenous people, who had been occupying government offices, houses and hotels since August. The people, known as the Rapa Nui, claim they are the descendants of the original Polynesian inhabitants of the island and the land is legally theirs.

In November, a lower court ruled in the favour of the Papa Nui, but the local government quashed the ruling and issued eviction orders. Rapa Nui leaders said the government’s promotion of tourism on the UNESCO World Heritage Site and unchecked immigration have put pressure on 2,200 native residents. 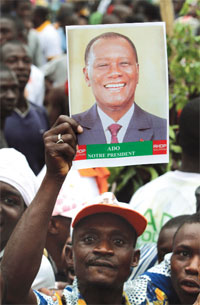 A political impasse between two presidential candidates has put at risk the economy of Ivory Coast, the world’s largest cocoa producer and a major gold exporter.

The incumbent, Laurent Gbagbo, was sworn in as president after the Constitutional Council rejected the electoral commission’s vote count, alleging irregularities.

Later, Alassane Dramane Ouattara took the oath of office, citing majority of votes in his favour.

Clashes between the supporters of Gbagbo and Ouattara have forced cocoa traders to suspend operations. Australia’s largest gold mining firm Newcrest Mining Ltd halted production at its Bonikro gold mine in the African nation.

The UN atomic energy watchdog voted to set up a global nuclear fuel bank that nations can turn to for power reactor-grade fuel instead of making it themselves. Countries which possess enrichment technology would donate reactor-grade fuel to the bank. The goal is to reduce the risks of weapon proliferation by providing an alternative to the production of nuclear fuel.

A week ago, Russia announced it has created the world’s first atomic fuel bank in the Siberian city of Angarsk. The government said the bank can satisfy electricity needs of a city of 12 million people.

An international commission set 2011 catch quotas for the endangered Atlantic bluefin tuna at 12,900 tonnes, a slight cut from this year’s 13,500 tonnes. 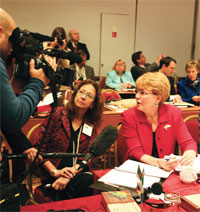 The International Commission for the Conservation of Atlantic Tuna (ICCAT) said the decision gives the species a 70 per cent chance of recovery by 2022.

A week before the decision, the 27-nation EU had dropped plans to seek cutbacks in the quotas based on scientific advice. After being forced by France, the EU said it will also consider fisher’s interests. France wanted the current quota unchanged.

Japan consumes 80 per cent of the world’s bluefin tuna, used in sushi. The fish’s population has fallen by 80 per cent since 1970 due to overfishing and scientists say at current rates it would be extinct by 2012.

Zambian government has launched a project that will allow farmers to purchase seeds and fertilisers via cell phones. Farmers who register with the system will receive pre-paid cell phone vouchers, each worth US $53, to use at agro-dealers.

These vouchers are transferred via cell phones to farmers. The pilot project launched in collaboration with the UN Food and Agriculture Organization is on in 28 of the country’s 72 districts.