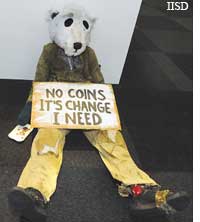 Delegates from 186 nations congregated in the Polish city of Poznan on December 1 to negotiate a new climate change treaty to succeed the Kyoto Protocol in 2012.

Ministers discussed their vision for long-term cooperative action and emphasized the economic slowdown should not overshadow the fight against climate change. unfccc Executive Secretary Yvo de Boer said developing countries will be the hardest hit as they have limited capacity to cope with climate change and need financial and other assistance to implement adaptation strategies. By the time the magazine went to print, differences between developing and industrialized countries remained largely unresolved on issues such as technology transfer and funding climate change projects.

Zimbabwe declared a national emergency after a cholera outbreak killed at least 484 people and sickened over 11,000 since August, said the UN on December 2, 2008.

Unable to handle the health crisis, doctors and nurses in the capital city Harare took to the streets on December 2. They blamed the epidemic on the country's political crisis and economic meltdown, which has left the health and sanitation system in disarray, forcing residents to drink from contaminated wells and streams. "Our central hospitals are literally not functioning," said Health Minister David Parirenyatwa and appealed to donors for an imm-ediate supply of medicines, soaps and water disinfectants. President Robert Mugabe blamed the crisis on western sanctions, which he said were aimed at trying to bring down his government.

With the rainy season approaching, charity organizations warned the water-borne disease could spread to neighbouring countries. The bordering Limpopo river is already contaminated with cholera bacteria and the South African government has warned people against using the river water.

Zimbabwe is suffering the world's highest inflation, officially estimated at 231 million per cent, unemployment of 80 per cent and dire shortages of food, water and fuel. On December 1, soldiers went on a rampage after they could not withdraw wages from banks, which have been short of cash.

Ghana plans to turn to dead trees underneath its Lake Volta as a new source of exotic timber. About 100 species of trees, including sought-after hardwoods such as ebony, teak and mahogany are lying buried in the lake bed. The trees got submerged when the lake was created as a result of the construction of Akosombo hydroelectric dam in 1964. It is the world's largest manmade reservoir and is expected to yield millions of dollars worth of timber. Ghana's Forestry Services chief Owusu Abebrese said Brazil and Suriname already harvest submerged timber, but this is the first of its kind in the African continent. A Canadian firm has secured the contract to dredge and extract the timber. Ghana's forest cover has shrunk to about a quarter of its 1960 size due to logging.

In October 2008, Arias and Dobles issued a decree declaring an open-pit gold mining project, by Canadian company Infinito Gold, "of national convenience" and allowed it to cut down 191 hectares of forest in the northern province of Alajuela. The forest is an International Biosphere Reserve.

The Central American nation's law prohibits changing the land use status of forest to allow logging, except in cases where the government has declared the project "of national interest". Following an injunction filed by environmentalists, the country's supreme court suspended the decree and ruled that the environment ministry cannot authorize the logging of the mountain almond (Dipteryx panamensis), an endangered species that offers food and shelter to the endangered great green macaw (Ara ambigua). The court also ordered the company to halt logging and construction work. In early 2008, Arias used executive powers to repeal a ban on open-pit mining decreed by the former president in 2002, and approved the project-estimated to extract 700,000 ounces of gold over the next decade.

Just three weeks after India declared itself free of bird flu, an outbreak was reported in Assam's Kamrup district. The outbreak was first reported in the Hajo area, 35 km from the state capital Guwahati, where about 600 birds were found dead in the last week of November. So far about 40,000 poultry in 20 nearby villages have been culled. The government has sounded a health alert and banned the sale and movement of poultry in and around Guwahati. 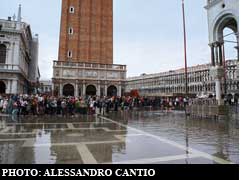 The historic Italian city of Venice, stretched across 118 small islands, was flooded in early December, by the highest tides in 20 years. Driven by heavy rains and winds of up to 70 km per hour in the Adriatic Sea, the water in the lagoon surrounding the city rose to 156 centimetres (cm), well above the 110 cm flood mark. The flood led to the evacuation of 3,000 people and damaged many historic buildings. The lagoon city experiences periodic floods, maximum in November. Italy's previous government in 2006 approved a US $5.8 billion project to build a system of adjustable dikes to protect the city. The project includes 78 floodgates that can be raised to keep water out of the lagoon; green groups had criticized the plan. The flood has rekindled the debate. 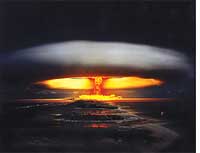 nuclear power
An end to 48 years of denial

For long, victims of France's nuclear test have sought compensation for cancer and other long-term health ailments. But the government resisted.

On November 26, French Defence Minister Herv Morin acknowledged this and said, "We must recognize the victims." The minister said a law would be introduced in January 2009 to compensate those suffering illnesses among the 150,000 army and civilians who were involved on the nuclear tests in Algeria and French-owned Polynesian atolls between 1960 and 1996--the year

when France halted nuclear testing. The government will draw up a list of health problems that could be because of radiation exposure during 210 nuclear tests.

Indonesian energy giant Lapindo agreed to compensate victims of a mud volcano triggered by the company's exploratory drilling operations. But the compensation has led to another controversy. The company said only 8,000 families were eligible for compensation and that it would disburse only US $680 million both for compensation and mud mitigation efforts. Independent estimates say that the cleanup operation of mud alone needs over US $4 billion. The volcano has swamped 12 villages in Java with stinking grey sludge since it burst two years ago, killing 13 people and displacing about 36,000.

amazon
Brazil cracks down on logging

Brazil's efforts to prevent illegal logging in the Amazon forests is facing stiff opposition from residents. On November 30, about 3,000 people attacked government offices in the town of Paragominas, in Para state, after environment police seized 400 cubic metres of illegally cut wood. Environment Minister Carlos Minc said the government would not back down and on the contrary "intensify our actions and punish those responsible".

Destruction of the Amazon appeared to accelerate a little over the past year after slowing since 2004. Satellite images by Brazil's National Space Research Institute showed that a total of 1.2 million hectares were deforested between August 2007 and July 2008. This is 3.8 per cent more than the land cleared during the previous 12 months.

Ignoring the lead taken by fellow states, Australia's apple island Tasmania has extended its ban on genetically modified (GM) crops for another five years, to 2014. "This would make the state's GM-free produce even more desirable," said primary industries and water minister David Llewellyn. In August, a Tasmanian parliamentary committee recommended extending the ban and improving product labelling. "The markets are demanding and are prepared to pay for food that is clean, green, high-quality and safe," said Llewellyn. "The decision by other Australian states (New South Wales, Victoria and Western Australia) to relax their GM bans has actually created opportunities for better access to prime markets across the globe." The current ban ends in November 2009.