China has come out with its first official compilation of 17 illegal food additives used in the country.

The banned substances include boric acid, commonly used as an insecticide but also mixed with noodles and meatballs to increase elasticity, and industrial formaldehyde, used in making soap and drains cleaner but also used as a common disinfectant added to dried seafood to make the products appear fresher and bigger. Also forbidden are leavening agents used to make cakes and dough sticks, which could leave behind aluminium residues if added in excessive quantities.

The compilation is part of a four-month long government crackdown aimed at improving the country's shoddy food safety record. The campaign was launched soon after the tainted milk scandal erupted in September 2008.According to government reports, the melamine contamination had killed six and sickened about 294,000 children. 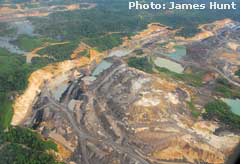 Indonesia, the country that boasts of some of the world's largest mineral deposits of coal, gold, copper and nickel, could lose foreign investments because of its new mining law.

The controversial law, which its parliament approved after three years of negotiations, gives local governments greater control over the nation's abundant resources. It limits the size of exploration areas, reduces the length of time miners have to extract resources and scraps a system that enabled companies to get all required permits for exploration and development easily. The law requires companies seek separate permits for each phase of mining activity. Besides, investors must process all mining products into metal locally, whether by setting up their own smelters or by using others, mandates the law. Authorities said this would serve Indonesia's interests better.

India's Ministry of Water Resources plans to impose a higher and uniform cess on the use of water by industry. The Advisory Council on Artificial Recharge of Ground Water has suggested a hike in cess for industries that use water as raw material, such as soft drink manufacturers and bottled water plants. Since water forms a significant constituent of the final product of these industries, they should pay a substantially higher price, the council said. It also recommended that the central government should impose a uniform cess on industries across the country.

Industries currently pay 25-30 paise as cess, depending on states, for using 1,000 litres of water. Assuming that industry uses four litres of water for producing every litre of soft drink and that it pays 30 paise as cess, it pays 0.1 paisa--Re 0.001--as cess per litre of soft drink that costs about Rs 45. Every year, industries produce over 2,500 million litres of soft drink. This means they pay Rs 0.25 crore as water cess for products they sell for Rs 5,000 crore. Considering that these industries use a staggering amount of water, the government loses out on a large chunk of revenue. 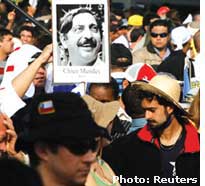 A report compiled recently by the country's Catholic Land Commission revealed that even twenty years after the killing of Chico Mendes, one of the world's prominent rainforest defenders, hundreds of human rights and environmental activists live under constant threat of assassination. This is due to their ongoing campaigns against a coalition of loggers, farmers and cattle ranchers. In February 2008, Francisco da Silva, 51, a leader of the landless movement in the Amazon, was shot dead after receiving death threats.

Health authorities in Punta Arenas, in the extreme south of Chile, recently alerted people against excessive ultra violet radiation (UV) in the region.

The authorities urged people to avoid exposure to sunlight between 10 am and 4 pm and recommended wearing sunglasses and skin protectors. To create awareness, authorities also handed out wide-brimmed hats. The alert came after the ozone lab of the Magallanes University in Punta Arenas recorded high intensity UV rays on December 26. A red alert was issued in nearby towns of Porvenir Natales and Tierra del Fuego, where the intensity level was eight and nine. The intensity level of UV rays was seven in Punta Arenas where authorities issued an orange alert. Media provide a daily report of UV radiation levels in Chile.

indigenous people
It's a boy

The population of the Onge, one of the oldest tribes on the Andaman and Nicobar Islands, has gone up to 93 with the birth of a baby boy on December 24.

The number of this tribe with a stone age lifestyle was stable for several decades till eight Onge people died on December 8, 2008, after consuming a chemical that washed ashore at Dugong Creek, an Onge village. They mistook the mysterious liquid in a plastic can for alcohol and consumed it, seriously falling ill. The deaths brought their population down to 92. 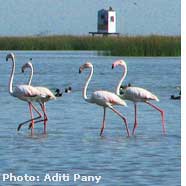 While the Lieutenant Governor of the Andaman and Nicobar Islands, Bhopinder Singh, has ordered a probe into the incident, the birth of the boy has cheered the tiny population of the tribals. "The baby and the mother, 31-year-old Tikoigagae, are doing fine," said Ratan Chandra Kar, deputy director of tribal health.

To track the route of migratory birds coming to Chilika every winter, 35 birds of five different species were recently fitted with satellite transmitters at the lake.

This is the first time that several species of birds, including the bar headed geese, pintal and common teal, were fitted with transmitters in the country.

The birds fly thousands of miles from different parts of the globe and the routes they take is still a mystery, said officials at the Chilika Development Authority (cda). The transmitters will help track the route these birds take, provide data on their places of origin and feeding grounds.

The project is part of the surveillance programme launched by cda to detect and contain the deadly avian flu.

Scientists had carried out a similar experiment with Siberian cranes in the Bharatpur sanctuary, in Rajasthan, six years ago (see 'Minor arrested', p15).

The year 2008 has been the tenth hottest year marking the end of a decade of ten hottest years since 1997, said the World Meteorological Organization (wmo). Figures released by wmo show it has, however, been the coolest year since 1997.

In a preliminary report, released by wmo, the global mean temperature for 2008 is 14.3C. 2008 was slightly cooler than the norm under current climate conditions, said the researchers, citing the La Nia weather pattern that developed in the Pacific Ocean during 2007. La Nia events give rise to cooler global temperatures. However, the decade has seen an overall 0.2C rise in temperature over the previous decade.

"Human influence, particularly emission of greenhouse gases, has greatly increased the chance of having such warm years," said Peter Stott of the Met Office Hadley Centre, the UK.

Malaysia has pledged to have 1,000 tigers roaming in the wild by 2020 by stepping up wildlife enforcement laws under the National Tiger Action Plan.

The country's wild tiger population fell from 3,000 to 500 in the last half-century, mostly due to large-scale deforestation and rampant poaching. Tiger meat is illegally exported to China, where it is served at restaurants offering exotic food and used in traditional medicines.

Malaysian tigers have been protected by wildlife laws since the 1970s, but the tiger action plan is the government's first concerted effort to reverse the population decline. The government plans to restore key forest corridors providing the animals with a wider territory. To avoid human-animal conflict, conservationists have suggested relocating tigers from areas close to human settlements.