Soaring food prices and lack of land have forced Mauritius, a food-importing country, to launch an ambitious initiative. The island nation is growing its food in other African countries where land remains fallow and labour cheap.

"We have a limit regarding land," said agro-industry and food production minister Satish Faugoo at the launch of the 2008-2015 food security strategic plan. "It is important for us to develop a partnership with countries in the region to produce food for our own people and for other countries," said Faugoo. It has already signed mous with Madagascar and Mozambique, under which 5,000 hectares (ha) of land will be available to Mauritian agro-entrepreneurs. An island of 200,000 ha, Mauritius has to provide food to 1.2 million of its people and to millions of tourists who visit the island every year. Mauritius produces 25 per cent of its total food requirement.

The uae too is buying land in Africa for food production. 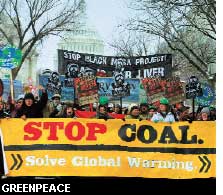 In what is dubbed as the biggest act of civil disobedience against global warming in the US, over 10,000 young climate activists from across the country gathered in Washington DC on March 2 and protested against a coal-fired plant. The 99-year-old plant is responsible for one-third of the Capitol's greenhouse gas emissions. It no longer generates electricity but provides steam for heating and chilled water for cooling the legislative buildings. The activists also urged the government to rebuild the economy through bold climate and clean energy policies. Congressional Democrats have already moved to convert the Capitol power plant to make it run on natural gas by the end of 2009. 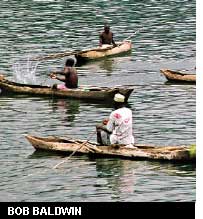 Rwanda is developing an integrated gas-extraction and electricity-generation facility at Lake Kivu--dubbed the killer lake because it contains large quantities of methane gas. "Periodic volcanic activities have induced a steady rise in methane levels in the lake in recent years," said Charles Nyirahuku, the project head. The 485-metre-deep lake is spread over 240,000 ha. It contains nearly two trillion cubic feet (tcf) of methane and five times that much CO2. This could erupt, risking the lives of about two million people who live in the lake basin. The plan is to extract methane--about 1.3 tcf is recoverable--and use the gas to generate electricity. Initially, the facility aims to generate 100 megawatt of electricity.

An Indonesian district in West Java province has ordered couples planning to get married to provide 10 trees for its reforestation programme. Those filing for divorce have to provide at least one. "Given the budget limitations, the government wants people to support the programme," said Wibowo, the district secretary of Garut. The central government launched the national afforestation programme in December 2008 that aims to plant one million trees by mid 2009.

Indonesia has some of the world's biggest remaining reserves of tropical forests, but pressure from agriculture and illegal logging has cleared large areas. The archipelago-nation has, meanwhile, applied to join World Bank's Forest Carbon Partnership Facility to help it make money through the sale of carbon credits.

Venezuelan President Hugo Chavez on February 28 ordered the army to take control of all rice mills in the country. The move comes after some firms, including US food giant Cargill and Venezuela's largest food producer Empresas Polar, refused to sell rice at government prices and threatened to paralyze production. In a television address, Chavez warned the companies could be nationalized if they interfere with supplies. However, he did not specify how long the intervention would continue. Venezuela regulates prices on basic foodstuff--chicken, rice and sugar--to combat soaring inflation that reached 30.9 per cent in 2008.

auto industry
Get green to kick-start

Carmakers opened the Geneva Motor Show on March 5 against a backdrop of grim sales figures, job losses and pleas for government bailout. To woo consumers, the show dedicated an entire pavilion to greener cars, not just fuel efficient, but with new technologies. Some of them are Toyota's third-generation Prius hybrid car, Bentley's supercar that runs on biofuel, General Motors' Ampera, a plug-in hybrid and Renault's ZE (zero emission) Concept. The same day, four international agencies, including the UN Environment Programme and the International Energy Agency, called on governments to attach fuel efficiency and emissions standards as a string with aid packages so that greenhouse gas emissions from vehicles can be halved by 2050.

Earlier, the European Commission ruled out a EU-wide rescue plan for carmakers, but it allowed member nations to go ahead with individual initiatives.

A nasa satellite designed to monitor CO2 levels on Earth crashed into the sea near Antarctica on February 24 minutes after launch from California's Vandenberg air force base. Early indications suggest the failure occurred after the protective shield that allows spacecraft to travel through Earth's atmosphere did not break away from the rocket while leaving the atmosphere. The Orbiting Carbon Observatory spacecraft was supposed to capture eight million CO2 measurements every 16 days, which would have helped scientists understand climate change better. 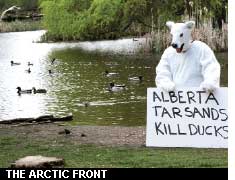 Members of the Beaver Lake Cree tribe, whose population is limited to 922, say oil firms such as Royal Dutch Shell and British Petroleum are ruining their traditional hunting and fishing lands. "The oil wells, oil pipelines and seismic exploration lines are affecting the wildlife," said community chief Al Lameman, who was in the UK recently to draw attention to their plight and garner support for the legal fight. The indigenous group filed a lawsuit in May 2008 calling for an injunction to nullify more than 16,000 project permits issued by the government. The permits contravene the treaty the Cree signed with Canada's federal government in 1876 giving up their ownership of huge tracts of land in return for guaranteed rights for hunting, fishing and their traditional way of life. The Alberta government says the region's tar sands are potential reserves of 175 billion barrels of oil, second only to those of Saudi Arabia.

Funding the legal action, says the co-operative bank, is part of its campaign to raise awareness of the environmental consequences of tar sand development. Extraction of oil from tar sands emits about eight times more CO2 than conventional fossil fuels.

Models sashayed down the aisle with clothes made partly from recycled materials at the London Fashion Week, as UK's department for environment, food and rural affairs (Defra) chose the event to launch its sustainable clothing action plan. The plan is not a new regulation, but green pledges from 300 high street retailers to make fashion more sustainable throughout its lifecycle from design, to manufacture, to retail and disposal. Only 16 per cent of clothing are recycled each year in the UK.

Health officials have found 30 cholera strains in Zimbabwe that has been battling with the waterborne disease since August 2008. By March 1, cholera had claimed the lives of 3,939 persons and infected 85,300. The International Centre for Diarrhoeal Disease Research, Bangladesh, found that almost all water sources in Zimbabwe, including borewells, were contaminated by the bacteria. The crisis may be difficult to contain as some cholera strains are resistant to certain antibiotics, they said.

The team suggested not to prescribe the same antibiotic for all places.