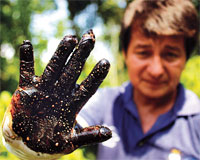 Pollution
Chevron not sorry For amazon

US oil giant Chevron has refused to apologise and pay fine for damage that an oil company it purchased caused in Ecuador’s Amazon rainforest. Nearly 30,000 Ecuadorians have accused oil firm Texaco, which Chevron acquired in 2001, of dumping 68 billion litres of chemical- laden wastewater between 1972 and 1992 in rivers and open pits. Dubbed Amazon Chernobyl, the event contaminated water and increased cancer rates, allege residents of the affected regions. Last week, a provincial court in Ecuador announced a penalty of US $8.6 billion against Chevron in an 18-year-long lawsuit against Texaco. Chevron said the ruling “is a product of fraud”. It added Texaco spent US $40million cleaning the area during the 1990s, and inked an agreement with Ecuador absolving it of any further responsibility.

Britain has scrapped its plans to rent out almost 20 per cent of the country’s national forests after intense public opposition. As part of its effort to cut the deficit, the government proposed leasing about 40,000 hectares of forests to timber firms, communities, local authorities and charities.

More than 500,000 people, including green groups and politicians, had signed a petition condemning the proposal that was expected to raise at least US $406 million. They feared a sale would lead to biodiversity loss and restrict public access.

Artificial caramel colouring used in Coca-Cola, Pepsi and other soft drinks contains two cancer-causing chemicals. Researchers at the National Toxicology Program, a wing of the US Department of Health and Human services, have found “clear evidence” that both 2-methylimidazole (2-MI) and 4- methylimidazole (4- MI) are animal carcinogens and likely to pose a risk to humans.

The colouring is produced by exposing sugars to industrial chemicals, am monia and sulfites. The reaction results in formation of 2-MI and 4-MI. In EU countries, artificial colours have largely been phased out and replaced with plantbased dyes.

Scientists at the University of California, Davis, found 4-MI about 12 times more than the permissible limit in five brands of cola, including Diet Coke and Coke Zero.

The Dutch government has dumped controversial plans of storing CO2 underground in empty gas fields in northern parts of the Netherlands. Residents say the storage could raise health risks. Carbon capture and storage (CCS) is a process of removing CO2 from fossil fuel power plants and storing it in underground reservoirs.

It is a means of mitigating global warming. Scientists have raised doubts on the usefulness of the storage, citing dangers of leaks. Last year the Netherlands had axed plans to inject CO2 under Barendrecht town following public anger.

The authorities are now planning to store the CO2 under the North Sea.

Being one of the world’s poorest countries, Sierra Leone relies mostly on imported second-hand products. But from April 1 no goods known to damage the ozone layer, like old refrigerators, will be allowed to enter the country, the state-run Environment Protection Agency has announced.

The attempt to ban such products dates back to 2008, when Parliament passed the law. But it was not implemented until now due to a lack of funding in the country. A decade-long civil war that ended in 2002 impoverished Sierra Leone. 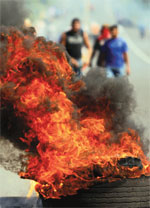 To prevent copper mining on their ancestral land, about 5,000 indigenous Panamanians armed with spears, sticks and stones clashed with riot police. Lawmakers have approved a law which opens western zone of Panama to foreign mining projects.

Companies based in Canada, South Korea and Singapore have shown interest in investing in the country. Experts estimate there are 17 million tonnes of copper in the region. This amount is equivalent to three years of copper production in Chile, the world’s largest copper producer.

Members of the Guaymi, the country’s largest indigenous group with about 164,000 members, say the law would spoil pristine rainforest areas and force them to relocate.