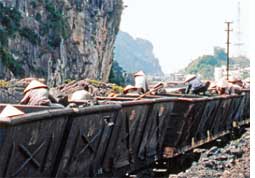 Vietnam has invited a Chinese company to mine a massive bauxite reserve beneath its Central Highlands, despite growing opposition to mining and a deep-rooted suspicion of China.

Deputy Industry Minister Le Duong Quang said the state-owned Vietnam National Coal would go ahead with a US $460 million venture with a subsidiary of China's state-owned company, Chinalco, to extract bauxite. The government estimates Vietnam's Central Highlands hold 5.4 billion tonnes of bauxite--the world's third largest reserve of the ore, used as a raw material to make aluminum. The government plans to attract US $15.6 billion of investment to mine and refine bauxite by 2025. The plan has provoked criticism from scientists and environmentalists who said the area is home to several marginalized communities.Moreover, contaminants from bauxite refining could jeopardize agro-business in the pristine area, they said. The Central Highlands produces 80 per cent of Vitnam's coffee and other commodities like rubber, pepper and cocoa.

After a few hiccups, Zimbabwe's new unity government is working towards reconstructing the country battered by years of economic collapse and political turmoil. As per the International Monetary Fund estimates, the government--a coalition of rivals President Robert Mugabe and Prime Minister Morgan Tsvangirai--needs US $45 billion to resuscitate its economy over the next five years. But it will take time before international donors, particularly the EU and the US, are convinced of the unity government's credibility and dole out cash in aid.

Finance Minister Tendai Biti recently visited London to appeal to international donors but returned empty-handed. He has secured US $400 million from African countries so far. But this is not sufficient even to pay government employees and teachers who have been threatening strikes over low salaries. On May 1, addressing the workers' union, Tsvangirai said the "government is broke" and urged to give the new government some more time. 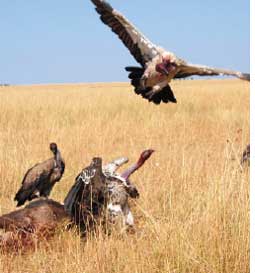 His party is also trying to fix some of Mugabe's policies. Biti is pushing for amendments to the Reserve Bank of Zimbabwe Act, blamed for fuelling inflation. Tsvangirai has called for transparency in implementing the land reform programme, introduced by Mugabe. He said continued farm invasions were stalling progress and warned the government would soon smoke out multiple farm owners and those not cultivating farms they occupy.

To help starving vultures, European Parliament members voted to amend a law to allow farmers to leave dead livestock in their fields, provided they are safe and hygienic.

Vultures have been starving to death since European rules aimed at tackling mad cow disease forced all dead livestock to be disposed safely. The regulation had starved vultures, particularly hitting the population of Griffon Vulture, which is native to Spain.

Iraq's Mesopotamia marshes, reputed to be the biblical Garden of Eden, is threatened with drought. Iraq's government has said it would be difficult to revive the country's southern marshland unless neighbouring Turkey and Iran shared water in a fair manner.

Fed by the Tigris and the Euphrates, the marshlands covered 900,000 hectares in the 1970s; by 2003, 90 per cent of the marshland had disappeared. Experts say after the 1991 Gulf War, the marshes became a casualty to Iraq's politics. To contain the uprising of rebels in southern Iraq, the then President Saddam Hussein built a network of dams and earthen walls and diverted the flow of the rivers drying up the marshes.

After the fall of Saddam Hussein in 2003, the UN launched an environmental programme and restored 58 per cent of the degraded area over three years. In March this year, the Iraqi government allocated US $47 million to replenish the marshland by restoring regular flow of the rivers. The project also aims to demolish the dams built during the Saddam regime. But Water Resources Minister Abdul Latif Jamal Rasheed said this may not be enough. The upper riparian countries have built a large number of dams and reservoirs choking the rivers, he said. Rasheed has called on Iran and Turkey to sign water-sharing agreements and double the flow into the two rivers. Water shortages in Iraq are also likely to affect crop production and electricity generation.

US President Barack Obama has rolled back several controversial regulations passed by former President George W Bush, since joining office in February. The latest to be repealed were a series of policies related to industrial operations.

Interior Secretary Ken Salazar asked a federal court to abandon a rule approved during the final days of the Bush administration that allows companies mining coal on mountaintops to dump their waste near streams. The original regulation, in place since 1983, had barred mining companies from dumping hazardous wastes within 30 metres of a stream. Green groups say reverting to status quo is not enough; the Obama administration needs to halt mountaintop mining itself.

The administration also rolled back a Bush-era regulation that excused oil and gas companies from a review process that was designed to ensure the safety of the endangered polar bear. Development of any such project in polar bear habitat must now be cleared by the US Fish and Wildlife Service.

Oil-rich Kuwait is eyeing Cambodia's farmland. It has offered US $546 million to the country, ravaged by years of civil unrest, for investment in agriculture.

"Kuwait has a lot of money, but Cambodia has a lot of fertile land," said Kuwait's Prime Minister Nasser Mohammed al-Ahmed al-Sabah during his recent visit to Cambodia to discuss issues related to economic and energy cooperation. Though Cambodia has not yet decided what exactly Kuwait would get in return, the speculation is Phnom Penh may offer 50,000 hectares of farmland, possibly on 99-year lease. Last year, another Gulf country Qatar had shown interest in investing US $200 million in Cambodian agriculture.

Following weeks of protests by Peru's indigenous people against laws that undermine their right to ancestral land and natural resources, the government promised to negotiate and asked them to end the protest.

But the promise has failed to pacify the 1,350 communities who have been blocking major road and river traffic since April 9. In the first week of May, a group of indigenous people occupied an oil facility in Loreto province and took 10 officials hostage to pressure the government for concrete action.

The indigenous people have been protesting against the government's roll-back of indigenous land rights and plans for water privatization. They also want a series of new laws enacted as part of Peru's free trade agreement with the US repealed. The communities say these laws have created a rush of private investments in natural resource extraction on their lands and have stripped away their right to ancestral territories. Activists fear as most of the indigenous communities' land titles are yet to be formalized, it will become easier to deny them their entitlements.