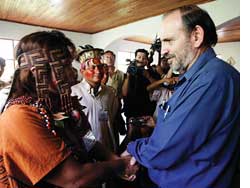 Peru's Congress abolished two decrees by President Alan Garcia that were aimed at opening large areas of the Peruvian Amazon to oil and gas exploration activities, logging and dams.

The decrees had spurred a two-month long fierce protest by the Amazon tribes who said the laws undermine their customary ownership over land and natural resources. Opening the Amazon rainforest to foreign investment would also destroy it, they said. The protests led to bloody clashes on June 5 and 6 after the police tried to clear blockaded roads around Bagua town. At least 50 people were killed. The Amazon tribes continued with the protest and did not budge until the decrees were overturned.

Garcia signed the decrees in 2008 to implement a free-trade agreement with the US.The government initially said revoking the laws would violate the free-trade deal, but Peru's trade minister later said the US government agreed to support changes to avoid more conflict.

Brazil's President Lula da Silva has a controversial bill on his hands. If approved, it would legitimize years of land grabbing in the Amazon rainforest. The proposed legislation, designed to quell land conflicts, would grant land title to those who have occupied up to 1,500 hectares (ha) in the Amazon before December 2004. Critics say the measure will legitimize about 300,000 properties illegally acquired across some 60 million ha of the Amazon rainforest. Former environment minister Marina Silva who has been striving to protect the Amazon from ranchers and soy farmers said the legislation favours commercial farmers over small landholders. "This will offset conservation gains of the past six years," she said.

After 13 years of appeals to prosecute Shell, the oil giant agreed to pay US $15.5 million to avoid a trial over human rights violations in Nigeria. In 1995, Shell had allegedly colluded with Nigeria's then military junta in the execution of nine activists, including environmentalist and writer Ken Saro-Wiwa. The trial was to take place in a New York court. The activists' families agreed to accept Shell's offer.

The activists led the Movement for the Survival of the Ogoni People in the early 1990s to draw attention to environmentally destructive practices of Shell and other oil companies in the Niger delta. They were also protesting abuses against the Ogoni people in the area. The movement provoked severe repression by the military junta, which, according to activists and some independent experts, were often paid by Shell and acted at the company's behest. Shell was also accused of paying at least two key witnesses in Saro-Wiwa's trial to alter their testimony, and after the guilty verdict, offered to press the government for his release if he agreed to withdraw the movement.

As Uganda struggles to rein in a polio virus that was identified in the country in February, the government said it could arrest parents who refuse to immunize their children during polio immunization drives. By June second week, the virus had crippled 10 children. Health experts fear 2,000 children have been exposed to the virus, if not infected. The country had remained polio-free for more than a decade.The virus is expected to have entered from neighbouring Sudan or Democratic Republic of Congo. Health Minister Paul Kaggwa said under the country's public health act and the children's statute, refusing to immunize a baby infringes its right to health and exposes other children to infections. Many Ugandan parents are reluctant to take children for immunization because they believe vaccines can sterilize them.

France's energy giant Total sacked all the 900 workers of a construction project at its Lindsey oil refinery in the UK after the workers protested. They staged a walkout a week earlier when 51 employees were laid off without citing reason. Total authorities said it sacked the workers because they were involved in an illegal walkout. Union leaders at Total's 17 power stations threatened to go on a sympathy strike after the company refused to reconsider its decision. 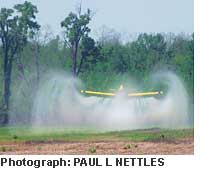 The Philippines' health department has recommended a ban on the aerial spraying of pesticides on banana and other plantations, citing a three-year-long study. Health officials said the study found traces of pesticides in the blood of 34.4 per cent of people living in banana-growing areas. The Philippines is the world's second biggest banana exporter. About 52 per cent people living around banana farms complained of pain and itchiness in the eyes and headache, which the officials said were due to the pesticides.

Filipino Banana Growers and Exporters Association disputed the study and contended the illnesses documented could be because of malnutrition. In a letter, it has asked the health department to reconsider its decision as a ban could threaten the banana industry and people dependent on it.

Last year, the Davao City council had passed an ordinance banning aerial spraying in the city--the largest banana producer in the archipelago. The association challenged the ordinance before the court. The court had stayed the city council's ordinance.

The US Congress passed the tobacco bill giving power to the Food and Drugs Administration (fda) to regulate tobacco products that kill more than 400,000 people in the country every year. The Family Smoking Prevention and Tobacco Control Act, as it is called, requires disclosure of all product ingredients and placing more prominent warning labels. The fda will also have the right to review all new tobacco products before they go to market and ban companies from advertising any of its products as the healthier alternative by describing them as "lite" or "mild", for example. It outlaws flavoured tobacco to deter young people from puffing. According to Congress, the law will help reduce the number of young smokers 11 per cent and adult smokers 2 per cent by 2019. President Barack Obama is expected to sign it into law soon.

Gaza's health ministry in conjunction with the World Health Organization (who) began a public awareness campaign to warn swimmers and fishers of raw sewage discharges and potential dangers. About 80,000 cubic metres of raw and partially treated sewage is being discharged directly into the sea every day at seven places along Gaza's 42-km coastline, said a report by the Water, Sanitation and Hygiene, a coalition of international organizations working on Gaza's water and sanitation crisis. Israel's blockade of the territory and the damage caused during its military offensive have crumbled Gaza's sewage infrastructure, the report said.

Turkey pledged to double the flow of water into the Euphrates river in Iraq over the summer. Its assurance came after the Iraqi government said the country is headed for an agricultural disaster unless Turkey released more water from dams on the river. It had also asked farmers not to plant paddy this season. Iraq depends on the Euphrates for about 90 per cent of its irrigation needs. Ankara assured to increase water flow to Iraq from 515 cubic metres per second (cms) to 715 cms during July, August and September. The Euphrates, which originates in Turkey and flows through Syria before reaching Iraq, runs at a fraction of its 2000 water flow of 950 cms.