Amid the standoff in Egypt, global oil prices are trading at their highest level in three years, touching US $100 a barrel. Although the country is not a major oil producer, it controls the 193-kilometre Suez Canal and a nearby pipeline that together carry about two million barrels of oil a day from the Middle East to Europe and the US. The Canal provides about five per cent of the global amount in transit. For the past two weeks, popular protests against the 30-year rule of president Hosni Mubarak have swept Egypt. Mubarak says Egypt would descend into chaos if he stepped down.

Despite protests by city governments and environmentalists, Canada has approved a plan to ship decommissioned power generators with radioactive contents through the Great Lakes to Sweden for recycling. Mayors of cities along the proposed route, like Quebec and Ontario, and green groups opposed the shipment of 1,600 tonnes of radioactive equipment and waste, saying an accidental spill would contaminate water and trigger an environmental disaster.

A Canadian private nuclear utility that generates about a fifth of Ontario’s electricity, plans to ship 16 school bus-sized generators. Bruce power is now working towards obtaining permission from all governments with jurisdiction over parts of its route, including the US and Denmark. 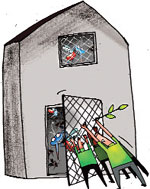 Last year, the trial had sparked concern among environmentalists, and was postponed due to their protests. They say very little is known about the GM mosquito, and how it interacts with the non-GM mosquito.

The US agriculture department has allowed farmers to plant GM alfalfa, rejecting two of the regulations proposed by the health department. The regulations were: deregulation of GM alfalfa; allowing it to be planted but requiring an eight km buffer between it and non-GM alfalfa; and restricting planting in seed-growing regions to prevent contamination.

Developed by Monsanto, Roundup Ready alfalfa is preferred by farmers because it helps kill weeds. Used as food for cattle, alfalfa is the fourth-largest US field crop. Mexico has denied an application by Monsanto to expand pilot plantings of GM corn in the country’s northern region, saying more experimental planting is needed. In 2009, permits for 22 experimental plots of size one hectare (ha) were given to the US seed giant. It now wants 50 ha. Mexico is the fourth largest producer of corn.

The European Commission is planning to drag Greece to the European Court of Justice for failing to protect Lake Koroneia.

The lake is a part of Natura 2000, Europe’s network of protected natural areas, but it has suffered from extensive illegal water extraction for irrigation and effluent discharges from nearby industries and towns. In 2004, Greece drafted a scheme—co-funded by the EU—to save the lake, including improving groundwater level and constructing wastewater- treatment systems. “But the measures have still not been put into practice,” said the EC.

After an eight-year struggle, Botswana’s indigenous Bushmen have won the right to access a borewell in the Central Kalahari Game Reserve. On January 27, the country’s apex court ruled that the government ban on the Bushmen’s use of the borewell water was “inhuman”. It also ordered the government to allow the Bushmen to sink new borewells on their ancestral land in the reserve.

In 2002, the government had barred the Bushmen from entering the reserve, arguing their presence is not compatible with preserving wildlife. While they won the right to return in 2006, a high court ruling said they could no longer use the borewell.

Botswana recently approved a US $3 billion diamond mine in the reserve.