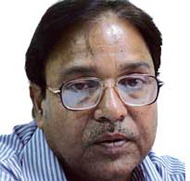 Plant growth promoters are naturally produced molecules that increase crop yield. Developing them for commercial use is difficult. The Central Institute of Medicinal and Aromatic Plants (CIMAP) received a US patent in May, this year, for developing a promoter, isolated from a medicinal plant. Anil Kumar Singh, Deputy Director of the chemistry division, spoke to Savvy Soumya Misra

We have been screening medicinal and aromatic plants for almost a decade at our centre in Lucknow. While experimenting with the medicinal plant, Callicarpa macrophylla (priyangu), we located the molecule called calliterpenone. It was isolated from the plant.

On the compound discovered

Examination of calliterpenone's structure revealed that it is an isomer of abbeokutone which is a precursor of Giberellic acid (GA3).The gibberellins are a class of growth-promoting hormones found in all plants.

Tests to prove its efficacy

The relation between calliterpenone and abbeokutone prompted us to investigate the potential of calliterpenone on plants as a growth promoter. It turned out much more promising than the gibberellins. On an average, it enhanced seed generation 35 to 150 per cent while shoot growth was between 20 to 82 per cent. The root growth recorded an 80 to 164 per cent increase. In vitro experiments were conducted on the root tissues of Rauvolfia serpentina (sarpagandha), an endangered medicinal species. 0.25 mg per litre of calliterpenone was found equivalent to 5 mg per litre of gibberellic acid in increasing root growth.

How to use it

We dipped seeds, root and shoot cuttings in a solution of calliterpenone before replanting them. We are still working on the exact amount of time for which they should remain in the solution for best results. Treatment of seeds for two hours as well as 24 hours gave good results.

On the plant that produces it

Calliterpenone is only found in the plant Callicarpa macrophylla, which inhabits the Terai region. The plant is cultivated for commercial purposes at our centres in Pantnagar, Uttarakhand and Lucknow, Uttar Pradesh. The quantity of compound derived from the plant depends on the growth of its leaves. There should not be a shortage of raw materials as it is a perennial plant. This plant is an integral part of the Indian system of medicine. A poultice of the leaves is applied on painful joints for quick relief. A powdered form of the flower is used in dressing wounds.

We are conducting experiments on paddy and wheat. The results are positive. A pre-licensing evaluation trial of the compound is on by a private company. We have developed it as a ready-to-use formulation that can be diluted and sprayed over seeds and plants. It is also available in a granular form. The price has not been fixed.

GA3 is found in all plants but can only be isolated from the fungus Gibberella furukoi . Culturing the fungus is cumbersome and expensive. This restricts the use of GA3 in crop improvement.