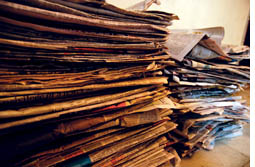 could the old newspapers piling up in the storeroom help treat waste water? Experiments have shown how newspapers can be used to remove heavy metals from industrial waste water.

A study at the National Metallurgical Laboratory in Jamshedpur and Pune's National Chemical Laboratory tested the cellulose in the pulp used to make newspaper. Cellulose, a natural polymer found in all plants, is used in the textile industry for its ability to adsorb certain dyes. The potential of cellulose to adsorb heavier metals has been tested before, though the applications are still being fully explored.
This experiment focused on the connection between newspaper pulp and zinc. Used newspaper was processed in a sodium bicarbonate solution to remove ink and other chemicals before being washed thoroughly. From there, the treated pulp was mixed with effluent from the electroplating industry that contained zinc, one of the leading sources of environmental pollution.

The treated pulp was able to adsorb a significant amount of the zinc, leading scientists to conclude that the method was successfully applied for (zinc) removal and it was also a potential adsorbent for iron, copper, and manganese. Sanchita Chakravarty, one of the researchers, said a further study is underway to test the adsorbent capacity for copper.

While one of the most common elements on earth, zinc is dangerous in large concentrations. It is used in anti-rust coatings, batteries, and mixed into alloys and compounds that are used to make paint, wood preservatives, and ointments.

Electroplating, which coats a metal that is electrically conductive with a thin layer of another metal, often creates waste water with high concentrations of dissolved zinc. While research into these treatments is still on, there is hope that it could be applied to industrial scales, say researchers.

Newspaper pulp is not the first waste product to show potential in filtering heavy metals from effluent water. Materials such as bamboo pulp, pine bark, peanut shells and sawdust from teak, spruce and mango trees have all been tested at various times for their ability to adsorb heavy metals in waste water, and the results have been promising.

"Adsorption is an effective, efficient and universal method of water treatment providing risk-free treated water," say researchers Imran Ali of Jamia Milia Islamia and V K Gupta of iit-Roorkee, in another work on adsorption. Further, many of the existing technologies for water purification are costly, ranging at us $10-450 per million litre of treated water. The cost of treated water by adsorption is us $10-200 per million litres, making it a more cost-effective strategy.