FOUND in the uninhabitable climes of Antarctica, psychrotrophic bacteria could be the answer to India’s sanitation problems. After successful experimentation in high altitude toilets used by defence personnel, the Defence Research and Development Organisation (DRDO) plans to use the bacteria to tackle the problem caused by open defecation in the country. It will also be put to use in Indian Railways.

India is home to 60 per cent of the world’s population that defecates in the open. This has serious health implications and is consequently a big economic burden. Open defecation causes numerous water-borne diseases like diarrhoea, which kills 500,000 children every year. “The treatment process in septic tanks attached to toilets also does not break down the waste completely,” adds Lokendra Singh, director of life sciences division at DRDO. Thus, sulphuric acid is produced which causes foul smell. Only 33 per cent of toilets in the urban areas are connected to the sewerage system; sewage from the rest flows in open drains, causing river contamination, as per 2011 Census. 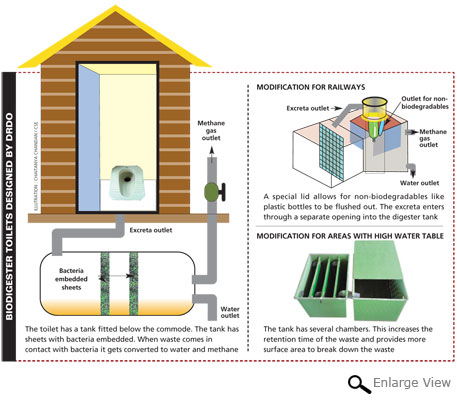 “Biodigester toilets can free us from these problems,” says Singh. The zero-waste biodigester technology breaks down human excreta into usable water and gas through anaerobic process. It does not have any geographical or temperature limitation and also does away with the need to set up large sewerage networks. The experiments to develop bio-toilets were started by DRDO around 20 years ago. “We wanted to design toilets for forces deployed at high altitudes as human excreta was becoming a big problem there,” says W Selvamurthy, chief controller of research and development division at DRDO. In areas like Ladakh, deep pits are dug for defecation. Once the tank is full it is emptied in fields. The waste has chances of mixing with melting snow that feed rivers downstream. In freezing conditions, the waste is collected and then incinerated which requires energy and labour. “But no bacteria were functioning in cold conditions,” says Selvamurthy. DRDO then decided to send scientists to Antarctica under India’s 13th Antarctic Mission in 1994 to look for microorganisms that can break down excreta. “After screening we found a variety of psychrotrophic bacteria like Clostridium and Methanosarcina,” he says. These bacteria can live in cold or hot climate and feed on waste to survive.

The bacteria were then cultured in the DRDO lab in Gwalior and tested at various altitudes and temperatures. They worked in temperatures ranging from 0°C to 55°C. To use it in a toilet, a tank was fitted below the commode to collect the excreta. The tank made of cement had sheets with bacteria embedded in it and free-floating bacteria. The bacteria cannot move out of the sheets but can multiply. When human excreta comes in contact with bacteria, it gets converted into methane and water through a series of steps of anaerobic digestion—hydrolysis, acidogenesis, acetogenesis and methanogenesis.

Faecal matter is composed of carbohydrates, protein and fats. In the first step, they are converted into simple sugars, amino acids and fatty acids. In the next step, these break to form carbonic acid, alcohols, hydrogen and water. In the third step, acetic acid, hydrogen and carbon dioxide is formed. In the last step, methane, carbon dioxide and water are formed. “Methane can be used for cooking while water for irrigation,” says Singh. The best part is that once applied, the bacteria can work for a lifetime.

The first bio-toilet was set up in Ladakh in 1994. “Since then, 159 more have been constructed in high altitude regions like Ladakh and Siachen. We have enough evidence to show they are working efficiently,” says Singh. DRDO along with Federation of Indian Chambers of Commerce and Industry has also set up six biodigester toilets at Dhamra district in Odisha in June. Every day around 150 people use these toilets. In July, DRDO and Union rural development ministry signed an MOU to build 100,000 biodigester toilets in 300 gram panchayats of the country in the next two years under the Centre’s flagship Total Sanitation Mission. Indian railways has also signed an agreement with DRDO to retrofit these toilets in 50,000 coaches over five years.

Tailored for specific use To suit different geographical requirements, DRDO has also made various design modifications in the biodigester toilets. For example, to avoid choking of toilets in railways because of people throwing non-biodegradable plastics, like bottles, a special lid has been constructed. On pushing the flush, the flap opens and the bottles fall on the track. The excreta enters through a separate opening into the digester tank.

The tank has several chambers to provide more surface area to hasten biodegradation. The chambers increase retention time of the waste in places where water table is high, like in Lakshwadeep or homes and offices where people flush frequently. In glaciers where the temperature is as low as -40°C, the toilet is fitted with solar panels of 240 watt to keep the excreta warm for processing. Design changes are also being worked for toilets in houseboats in Srinagar to avoid water contamination. One biodigester toilet costs Rs 15,000. “The cost will come down with increase in scale,” says Selvamurthy.