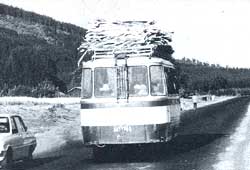 WITH SUPPORT from the Ethiopian government, non-governmental organisations (NGOs) are implementing programmes to create environmental awareness among the people to counter deforestation that has reached crisis proportions in the mountainous country.

The central Ethiopian highlands, which support more than 78 per cent of the population, have been virtually deforested by extensive human settlement, farming, and exploitation of forest products. Besides, about two-thirds of Ethiopian farmland is on slopes, which means lack of vegetation cover makes them particularly vulnerable to erosion of the fertile topsoil.

Ethiopian forestry expert Makonnen Lakew says at the turn of the century, 40 per cent of the country was under forest cover. By the early 1960s, this had been reduced to 20 per cent and at present the country's forest cover has dwindled even further to an incredible 1.5 per cent. In some areas in the central highlands, the situation is worse and the forest cover is only a mere 0.5 per cent.
Fuelwood consumption, Lakew says, is the major cause of deforestation in Ethiopia. More than 90 per cent of the country's population is dependent on fuelwood as their main energy source. Even the government now acknowledges that declining agricultural production is linked closely to environmental degradation. The country's peasants, however, have been more enthusiastic about growing trees after 1991 when President Meles Zenawi assumed power.

World Vision International -- a major development agency in Ethiopia -- and other NGOs are playing a key role in implementing environment protection programmes in rural communities. They aim at creating environmental awareness by working with village elders, government administrators, church leaders, school officials, and peasant associations. In a bid to avoid duplication of efforts, each NGO is allotted a specific area of activity and they have to work in association with government ministries.

Millions of seedlings are distributed each year by the NGOs. Fruit trees among the seedlings being distributed, because they would help farmers become self-sufficient by increasing their cash earnings. The government has put severely barren areas under official protection so that they can be replenished.

But Lakew warns the demand for timber and firewood, will hamper afforestation efforts, especially as the farmers sell much of the wood.

Another limiting factor, he says, is the lack of water resources. In some lowlands one has to drill 120 metres to 150 metres into the ground to reach the water table. This problem is being tackled by locating nursery sites near permanent water sources and farmers are advised to replant the seedlings in their villages during the rainy season.

Lakew says that a key issue that needs to be addressed is the training of women, for afforestation efforts, it is generally conceded, would be more successful if women were recruited as extension workers.