NGOs rush in where governments fear to tread

Nongovernmental organisations have criticised the cautious stand the desertification convention secretariat has taken in order to garner funds from industrialised countries. 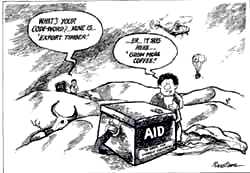 MORE THAN 50 non-governmental organisations (NGOs) from across the world met recently in the sub-Saharan city of Bamako as a prelude to the intergovernmental convention on desertification, which was proposed by African countries at the Earth Summit in Rio de Janeiro.

When the industrialised countries did not show much interest in the desertification convention, the secretariat of the convention sponsored the Bamako meeting of NGOs to highlight community level measures against desertification. Convention chairperson Bo Kjellen of Sweden and secretary general Arba Diallo of Burkina Faso felt the NGO meet would help them regain the donors' interest.


And, fearing that the industrialised countries would not cough up more funds unless they were assured their aid would be utilised efficiently, the convention secretariat asked the participants to focus their discussions on desertification programmes that could be undertaken at the field level and would guarantee strict monitory regulations, especially in Africa.

At the meet, however, the NGOs threw caution to the winds and highlighted the global linkages between debt, trade and desertification. Quoting from a confidential World Bank document on the convention, they demanded to know why the convention should oblige developing countries to adopt clauses on good governance when donor countries had already decided not to put any additional money into controlling desertification. "Good governance requires wise distribution of financial resources for conservation of the world's natural resources and this should be followed by industrialised countries as well," protested Edward Rugumayo of Earth Care Africa in Uganda.

Representatives of several international NGOs also asked if the secretariat was confident its strategy would bring in the required funds from the industrialised nations. Koos Neefjes of OXFAM said the UK had decided against funding the desertification convention until it was convinced of its international importance, which, he said, could be proved only by highlighting its global linkages.

The NGOs also developed a comprehensive list of the causes of desertification, both global and local, which they recommended for inclusion in the convention. Some representatives said it was better not to have a convention at all than to have a "flawed convention biased against developing countries".

Another document prepared by the Organisation of African Unity (OAU) also prescribed a cautious approach. Said an NGO representative from Africa, "OAU seems to have formulated this document under the pressure of somehow charming the donors to the issue of desertification control." The document commits African countries to specific actions like empowering the people and their grassroot organisations and promoting pastoral development strategies, but on global commitment, it appeals for money "in accordance with each country's capability".