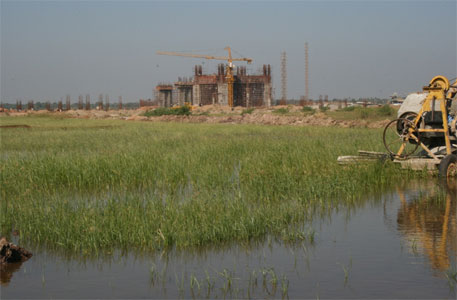 The National Green Tribunal (NGT) has set aside the environment ministry’s order revoking the environmental clearance to Nirma Limited’s cement plant, proposed to come up at the site of the reservoir Samadhiala Bandhara, in Mahuva block of Gujarat’s Bhavnagar district. The order, delivered by the principal bench of the NGT headed by Justice Swatanter Kumar on January 14, has brought to a frustrating end the local community’s struggle to protect a crucial water body in their area.

In 2008, the Gujarat government had allotted 268 hectares (ha) to Nirma Limited to set up a cement plant with an annual capacity of 1.91 million tonnes. The project was to include the construction of a coke oven plant and a captive power plant. The project was granted environmental clearance on December 11, 2008, based on a rapid Environmental Impact Assessment (EIA) report submitted in July 2008.

Local residents, however, were strongly opposed to the project as it was to be built over their water body, the Samadhiyala Bandhara, created by damming a local river. The reservoir provides protection from ingress of salinity as well as irrigation in the area.

The project was first challenged in Gujarat High Court, and then, in the Supreme Court. Finally, the environment ministry revoked the project’s environmental clearance  on December 1, 2011, stating that clearance was granted based on undisclosed and incorrect information provided by Nirma Limited. It observed that the site of the cement plant was actually a wetland or water body and not a wasteland as argued by the company in its various submissions to the ministry. The cement plant site was, in fact, called “barren land” by the company in the EIA report. There was also no mention about the presence of a large water body.

While Nirma argued that the site of the cement plant was a wasteland, various committees that were set up to evaluate the actual ecological status of the site had confirmed that it was indeed a water body. These included the Shelat Committee and a subcommittee of ministers formed by the Gujarat government in 2009, and in particular, two expert committees, the C K Varshney committee and the C R Babu committee, set up by the environment ministry in 2011.

The NGT said that the environment ministry revoked the clearance to Nirma based on the C R Babu committee report which “recommended classification of the land in question as wetland and water body, and observed that it had manifold ecological utility besides helping recharge of ground water, sustain rich biodiversity, provide pastures and support settlements and as such common property resource”.

In its report, the C R Babu committee had said that “location of Nirma cement plant, captive coal-based power plant and coke oven plant is part of Samadhiyala Bandhara water body and its periphery in the catchment area”. The committee had recommended that “the site of the Nirma cement plant be relocated elsewhere outside Samadhiala Bandhara—a common property resource”.

Instead of dwelling on observations made by other expert committees, the tribunal highlighted the ones made by its own expert members. Justice Kumar ordered NGT experts to conduct two site visits in June and September, 2013, to “decide on the real issues”. Following the June visit, members observed that the Bandhara was completely dry despite 75 mm rainfall over a short period. During a second site visit in September that year, the members noted that the Bandhara was almost full with shallow level depth all over. There was growth of aquatic vegetation and presence of few water/migratory birds. No part of the proposed plant was noted to be under submergence and the adjoining areas beyond the boundaries of the proposed cement plant had shallow water accumulation.

Based on these observations, NGT said that the reservoir “serves as a temporary storage of water, which gets used by farmers or gets evaporated due to its large spread or gets percolated due to fairly high porosity of soil and as such cannot be called as a productive wetland having all perennial features of a wetland”. (See ‘The judiciary and the jury: was inspection by NGT experts necessary?’)

They further emphasised that “the revenue records described the area in question as a wasteland, and it was never, even till today, identified as wetland by the Central Wetlands Regulatory Authority and so notified by the Central Government under the provisions of the Act for the purposes of Wetland (Conservation & Management) Rules, 2010”. With this observation, the bench ruled in favor of the company saying “it is difficult to hold that there was any deliberate concealment and or submission of false or misleading information or data to the authorities” by Nirma Limited.

“The NGT’s order makes it is okay for a project to come up in a water body as long as it has not been notified as a wetland,” says advocate Anand Yagnik, who has also been fighting the case on behalf of the community for many years. “Irrespective of the technical categorisation of the concerned site as a wetland, the issue that should be central is can such a significant water body, from both social and ecological perspectives, be compromised for industrial development,” he adds.

The tribunal, in its latest order, has criticised the C R Babu committee report, saying that “one wonders how Professor Babu committee could document an exhaustive list of birds, presence of endangered vultures and Asiatic lions and could give soil type in two hours of field visit, without any backing of any specific scientific study in relation to the project site”.

On the other hand, the Babu committee states in its report that it undertook the site visit between April 18 and 19, 2011. It says it surveyed the entire water body, interacted with several members of the community, Nirma officials, consultants, and state government officials, and reviewed related documents such as toposheets, contour maps and satellite imageries.

The Varshney committee had also laid emphasis on the wealth of species and multiple ecological utilities of the water body. Its report had noted that the reservoir “possesses all the characteristic features of wetland ecosystem (fresh water body), supporting rich aquatic vegetation composed of different types of aquatic plant species, aquatic birds, fish and amphibians”. The committee had also highlighted the outdated and incorrect information based on which projects are cleared. They had rightly pointed out that in the Nirma case, “revenue records should be changed based on ground realities”, or else “every wetland will be lost in the name of wasteland”.

A defeat of environmental reality

Acquitting Nirma of any wrongdoing, the NGT has now asked the Gujarat State Pollution Control Board to monitor the project for a period of two years to see what “the effects of running of the project on the water body” will be. Such a study is “practically meaningless once the project is allowed”, says lawyer Abhimanyu Shrestha, who was arguing at the NGT on behalf of Mahuva Bandhara Khetiwadi Paryavaran Bachav Samiti.

By allowing Nirma to carry on with the cement plant, the NGT order may have set a precedent for the misappropriation of water bodies in favour of future industrial projects. It has placed more emphasis on archaic land use classification instead of considering repeated observations by experts on the ecological characteristics of the area. The bench has also undermined the very essence of undertaking an environmental impact assessment, which is meant to consider and evaluate the ground ecological and environmental realities of an area and assess the impacts that a project might have on it.

The local community rues that the NGT reduced the debate into “wetland” versus “wasteland”. In fact, the Supreme Court was also cautious about narrowing down the scope of the impact of the project. The apex court, in its order dated September 9, 2011, had clearly noted that “if MoEF (environment ministry) comes to the conclusion that the site allotted to Nirma Limited consisted of water bodies and not wastelands, then the environment clearance dated December 8, 2008, cannot survive. It has to be revoked. In such an eventuality, the question of examining whether project area is a wetland or a water body does not arise”.

The NGT did not reflect on this observation by the Supreme Court, says Yagnik. He also points out that Justice Kumar had served in the Supreme Court bench that had heard the case, and thus, had complete knowledge of the facts on the basis of which the clearance was revoked.

Final direction under Section 5 of the Environmental (Protection) Act, 1986 to revoke the environmental clearance by M/s Nirma Ltd