Mine leases continued to operate without requisite clearances despite a previous ban on mining, says an RTI response 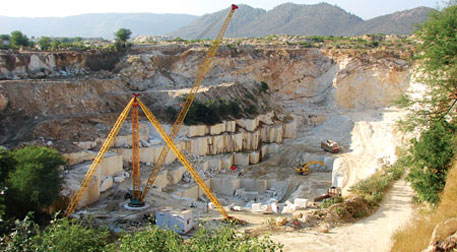 The National Green Tribunal (NGT) on Monday ordered a ban on any kind of mining activity in Alwar district of Rajasthan. Before the ban, many residents living near Sariska National Park had told the court that 85 mine leases were operating near the national park without any environmental clearance.

Earlier in may 2014, the central zone of NGT had banned mining in the national park and asked Rajasthan government to conduct a survey. However, not much has changed since then.
The court order is a huge setback for the Bhartiya-Janata-Party-led Rajasthan government which had announced a policy to increase mining area in the state by three fold. According to the petition filed by Alwar resident Khayali Ram, most of these leases belong to stone and marble manufacturers who have neither conducted any environmental impact assessment nor have consent from the environment ministry.

A bench headed by NGT chairperson Justice Swantanter Kumar issued notice to the Union Ministry of Environment, Forests and Climate Change, Rajasthan government, Rajasthan State Pollution Control Board (RSPCB) and others, seeking their response by March 2. "No person would be permitted to carry out mining activity without the requisite environmental clearance, consent from the Pollution Control Board and permission from the mining authorities," the order said.

Khayali’s petition has also alleged that illegal stone and marble mining is being carried out in Rajgarh tehsil in Rajasthan's Alwar district in violation of the provisions of the EIA Notification, 2006. It further added that the mines in Rajgarh tehsil are carrying out their operations, including blasting and without appropriate statutory clearances required to operate such mines and destroying the Aravalli hills.

Not the first time for Sariska

The petitioner stated that these mine leases are located about 100 metres from the sanctuary's boundary wall and a few are operating adjacent to the boundary wall. Sariska has been the hotspot for tiger translocation programme, which entails re-introduction of tigers in these forests since 2008. As a proof, Ram provided the tribunal with two replies he received under Right To Information (RTI). The responses reveal that most of these mines are operating without environmental clearance and the RSPCB’s consent to operate (CTO). When asked if RSPCB had granted permissions to any of the 85 mines, the concerned authority replied that only two had CTO. The State Environment Impact Assessment Authority (SEIAA) in its RTI reply stated that no environmental clearance has been given to any of the 85 quarries. As per the EIA notification 2006, all mines of less than 5 ha are required to obtain a clearance from SEIAA.

On the other hand, the Rajasthan government has proposed that only the area within a radius of 100 metres should be the eco-sensitive zone (ESZ) for the Sariska sanctuary. NGT on Monday also issued notices to all the 85 "illegal" quarries mentioned in Khayali Ram's application.

This is not the first time that NGT issued a ban on mining activities in Sariska. Earlier in May 2014, NGT’s Central Zone Bench in Bhopal had banned all mining activities in 84 stone and marble quarries located inside and within one kilometre radius of the Sariska Tiger Reserve and adjoining Jamua Ramgarh Sanctuary in Rajasthan. The bench had also directed the Rajasthan government to take steps to ensure that “no mining activity is carried out in 61 plus 23 mining leases and the same shall remain discontinued till further orders”. The two-member Bench of Justice Dalip Singh and P S Rao also allowed the mining department to carry out a survey to verify the location of the quarries. The state government is yet to provide the details of the survey as it was established during the recent hearing related to Khyali Ram case.

Further, in 2005, a task force was appointed by the state government to check illegal quarrying. Before that, environmental activist Rajendra Singh of Tarun Bharat Sangh, an NGO based in Alwar district, had filed a public interest petition in the Supreme Court in 1991. The apex court then directed the state government to stop issuing mining licences. However, when stone quarry owners approached the Supreme Court again, the court ruled that mining can take place one kilometre from the park. Despite court’s orders, the mine owners did not bother to take permission and consent from the state government.

Rajasthan is a leading producer of marble and various kinds of stones. According to Indian Mineral Yearbook published by government-owned Indian Bureau of Mines (IBM), Rajasthan produces 85 percent of the total marble produced in India, most of which is exported to countries like Italy and United Arab Emirates. Alwar-Sariska belt according to IBM, has about 20 million tonnes in reserves. Incidentally, stone and marble mining has immense impact on the ecology of an area. While mining in these areas have blocked off channels of water that flows in the region and reduced the habiat supported by Aravalli ranges to wasteland, marble slurry produced during cleaning and washing of marble in these mines have immense impact on the ecology. According to a research published in Journal of Environmental Research and Development in June 2013, Rajasthan generates five to six million tonnes of slurry. This can neither be treated nor disintegrated. According to the Indian Bureau of Mines’ yearbook, slurry reduces soil’s porosity, waster absorption and percolation levels. It also affects groundwater recharge. During monsoons, it flows into rivers, drains and other water bodies, affecting water quality, reducing its storage capacity and damaging aquatic life. “After the slurry dries, the finer fractions become airborne and pollute the air,” states the yearbook.

On the other hand, Rajasthan government is planning to increase reserve area for mining activities by three times after it announced a draft mining policy in December 2014. At present the state government has given mining lease of 1,846 square km, which is 0.54 per cent of the total geographical area of the state. Now the government is going to increase it to 1.5 per cent in the new mining policy. The draft of the new mining policy released by the mining department also states that mining lease for sand stone would be issued on agriculture land as well. In the new policy, small business would be able to apply for the mining lease. At present, mining lease is available for minimum four hectares. The government, however, has decided to issue mining lease for small area of one hectare.

Judgement of the National Green Tribunal regarding mining in protected forest area/prohibited area of the Aravali range, Rajasthan, 03/07/2014

Order of the National Green Tribunal regarding mining activies falling within the prohibited zones like core area and buffer area of Sariska Tiger Reserve or any other prohibited Zones, Rajasthan, 18/06/2014