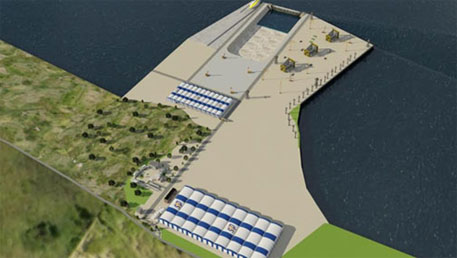 The National Green Tribunal (NGT) has slapped a fine of Rs 25 crore on a company that builds offshore platforms and rigs—Das Offshore—for causing environmental damage to the coastal area in Raigad district of Maharashtra. The damage was caused during the development of an offshore fabrication yard  next to the Rajapuri creek, an inlet of the Arabian Sea.

The decision was delivered in December end by the western zonal bench of NGT in Pune, chaired by Justice V R Kingaonkar. The matter was transferred to NGT from the Raigad district court in November, 2013.

The development of an offshore fabrication yard near Rohini village in Raigad district involved significant land reclamation—nearly 25 hectares of the inter-tidal region of the Arabian Sea. Such land reclamation and associated activities for development of the fabrication yard without proper assessment and precautionary measures has caused destruction of mudflats and mangroves in the area, and has also caused damage to other aquatic flora and fauna, fishing activities and spawning of fishes. The bench also held that the company has violated the statutory obligations of obtaining environmental clearance under provisions of the Environmental Impact Assessment (EIA) Notification, 2006 for the purpose of carrying out the project activities by intentionally suppressing facts.

Naim Sharif Hasware, a businessperson from Raigad and the applicant in the matter, contended that the company started excavation of land, filling of land and blasting work at the site by engaging various contractors without obtaining the necessary permissions from the government departments concerned. Such activity has caused significant damage to the mangroves situated in the lands adjoining to Rajapuri creek.

The company bypassed and flouted regulatory provisions for obtaining clearances for the project.

The tribunal noted that given the scale and nature of the project, both environmental clearance (EC) and coastal regulation zone (CRZ) clearance had to be obtained by the company before any project work can begin. However, the way the company went about obtaining certain permits remains extremely vague.

Das Offshore had submitted an application for CRZ clearance to the Union Ministry of Environment, Forests and Climate Change (MoEF&CC), which involved foreshore facilities for assembling and offloading of structures for offshore extraction of oil and natural gas in Rajapuri creek. However, as reported by MoEF&CC officials to the court, the company was asked to provide clear justification for selection of the site, which is surrounded by mangroves and mudflats, for appraisal of the proposal. It was also made clear that the project will require both EC and CRZ clearance and the company was asked to provide a draft impact assessment report for perusal of the Expert Appraisal Committee (EAC) of the environment ministry.

The company, however, failed to provide any clear justification for undertaking the project at the site which clearly was an important aquatic habitat. The NGT bench in its observation noted: “there is absolutely nothing on record to show what kind of clarification/information was given by the company” following the directions of the environment ministry.

According to affidavit filed by Anish Parashurame, scientist of the Maharashtra Environment Department, the company submitted an application for clearance to the state government. This was done under the pretext that it was a category B project, and thus, as per EIA Notification, had to be cleared by the state environment impact assessment authority (SEIAA). With still no clear justification given site selection, an EC was given to the company by SEIAA on January 17, 2012, noting that “no land reclamation shall be carried out”.  The clearance was also given without obtaining any direct recommendation from the Maharashtra Coastal Zone Management Authority (MCZMA) by the SEIAA, which MCZMA had sent to MoEF&CC earlier.

The condition that no land reclamation shall be carried out was subsequently removed by the state environment authorities on January 31, 2012, by issuing a “corrigendum” and effectively allowing the applicant to undertake reclamation activities, argued Naim. “This is a clear violation of the environmental laws and is arbitrary action on part of the SEIAA and environment department,” he contended. Das Offshore, however, had contended that “there is nothing as illegal act committed either by the authorities, or by the company as reclamation of land was essential”.

Not just the company, the action of the state authorities has also been sternly questioned by the tribunal. Expressing serious dissatisfaction about the conduct of the state authorities, the bench noted: “the appraisal including selection of site, changes if any in the original plan, status of construction of project and impact on the environment, a further environment report based on ToR was essential for the project evaluation.”  The bench said that the state expert appraisal committee (SEAC) should have called upon MCZMA and the Maharashtra Maritime Board, to confirm earlier clearances, or clarify any conditions, as necessary. This was not done by either SEAC or SEIAA.

The court also noted there is no clear justification for why all of a sudden, without considering implications of environmental impact, even though MCZMA letter is very specific regarding the scale, purpose and nature of reclamation which can be carried out, the condition about reclamation was summarily withdrawn by SEIAA.

The cost of intentional suppression of facts is now big for the company. The Rs 25 crore fine that NGT has imposed, is required to be paid by the end of January, 2015. Of the total amount, Rs 5 crore is to be paid  for mangrove plantation programme in the project area, and Rs 20 crore is to be paid to the State Environment Department for development of environmental programmes, including generating environmental awareness, construction of solid waste and sewage management facilities, public toilets, and such initiatives which are not adequately funded. A compliance report in this regard is to be submitted to NGT by February 15.

Though the court has not scrapped the project considering that it has progressed significantly and reversal can cause more damage. However, if the company fails to pay the amount within the given time, the Collector of Raigad can seal the company premises and recover the amount by auctioning of all property of the company, including land, building, lock, stock and barrel.