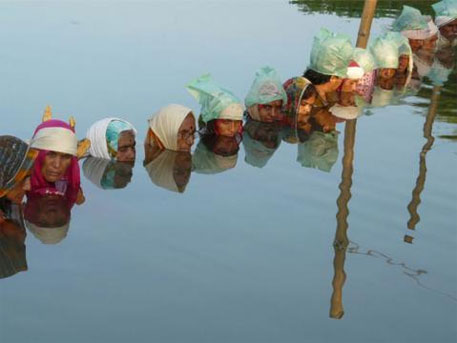 Taking serious cognisance of the insensitivity shown by the state and Central governments towards the people affected by the Omkareshwar and Indira Sagar dams on the Narmada river, the National Human Rights Commission has issued notices to them. The notices pertain to the illegal submergence of land belonging to the oustees without their being rehabilitated first, which is a violation of Supreme Court orders. The notices have been issued to the secretaries of the ministries of water resources and environment, secretary of Narmada Control Authority and chief secretary of Madhya Pradesh, all of whom have been ordered to file detailed reports before the commission within four weeks.

The NHRC notice raps the Madhya Pradesh government over its “alleged insensitive attitude and illegal moves” in pushing 2,500 families in Omkareshwar and thousands of families in the Indira Sagar dam into submergence without proper rehabilitation, destroying lives and livelihoods in the process”. It also takes cognisance of Narmada Bachao Andolan’s stand that “all dams in the Narmada Valley are being pushed illegally with scant respect for the environment, law and justice”.

The Central government, the Narmada Control Authority, and the ministries of environment and water resources got the rap for failing to intervene, despite staging of a jal satyagraha, in which protesting oustees were sitting in neck-deep water for 17 days near the Omkareshwar dam and 15 days near the Indira Sagar dam.

The Madhya Pradesh government’s dismal record of rehabilitating dam oustees also came in for criticism. The notice points out that 11,000 families have been rehabilitated in Maharashtra and Gujarat following agitations over the Sardar Sarovar Project, but not one is rehabilitated in Madhya Pradesh where protests are on against all the large dams in the Narmada Valley that fall in the state's territory.

It may be recalled that the water level in the Omkareshwar and Indira Sagar dams was raised by the Madhya Pradesh government in violation of court orders and without rehabilitating the oustees in July 2012. Following intense agitations, state government conceded to the demands  of Omkareshwar oustees, and the water level was reduced. However, at Indira Sagar, the agitation was crushed by force. The Narmada Bachao Andolan has filed a contempt of court case  against the state government in the Indira Sagar dam case.