Turkey is hit by another earthquake. Having learnt their lessons three months ago, government agencies react quickly to provide relief 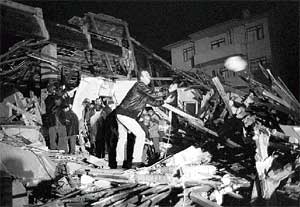 for the second time in three months, a devastating earthquake rocked Turkey's north-western province of Bolu on November 12, killing nearly 400 people and injuring more than 3,000. The earthquake measured 7.2 on the Richter scale and destroyed some 300 buildings, reducing hundreds of houses to rubble. The earthquake on August 17 this year killed more than 20,000 people.

Rescue work was hampered by the severe cold conditions prevailing in the country. The mercury has plummeted to a low of 5c . Many victims are still trapped in the debris and their chances of survival are bleak. "As the weather is very cold, body resistance goes down and the ability to survive decreases," says Ali Sehirlioglu, a physician from Istanbul working from a tent in Duzce. The cold is not the only danger. Sehirlioglu and his team have treated scores of people for serious burns sustained when fires broke out in heating systems of the collapsed buildings.

The rescuers had horrifying tales to tell. For example, in the town of Kaynasli, physicians had to amputate the hand of a pregnant women to pull her out of her destroyed apartment. The woman, Nilgun Bayram, was trapped in the rubble for 18 hours.

Prime minister Bulent Ecevit's government, embarrassed by the criticism from the media and the public for reacting slowly after the last earthquake, has got a better press this time. "We learnt very important lessons from the last earthquake," said Yasar Okuyan, the labour minister. "The state was paralysed on August 17. But this time it took control within an hour," reported the daily Sabah. The economic losses have been staggering. It is estimated that the tremor cost the fragile Turkish economy us $ 10 billion.