Nipped in the bud 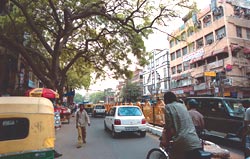 Residents of Gurdwara Road in Delhi's Karol Bagh succeeded in preventing the chopping down of around 90 trees that are more than 50 years old. After the Municipal Corporation of Delhi (mcd) felled four trees under a road-widening project, the people of the locality threatened to take to the streets. They contended that the trees constituted the only green cover left in the area. The residents filed an intervention application in the Supreme Court (sc). And the sc came to their rescue by ordering a stay on the mcd plan. As a review measure, mcd commissioner Rakesh Mehta visited the area. He assured the residents that no more trees would be cut to decongest the road. He also promised that the corporation would adopt the "most viable option and not deprive people of whatever little greenery remains".On inspection, it was found that two parking rows which had been encroached by shopkeepers obstructed traffic. Rather than felling trees, the road could be made a one-way zone, Mehta suggested. Moreover, zonal officers were asked to speed up two multi-layered parking projects in the vicinity of the area.