Nipping malaria in the bud

Scientists from the Desert Medicine Research Centre, Jodhpur, have found that the Indian nightshade (Solanum xanthocarpum) is fatal for three species of malaria vectors 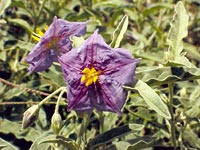 here's how a small shrub can root out a huge problem. Scientists from the Desert Medicine Research Centre, Jodhpur, have found that the Indian nightshade (Solanum xanthocarpum) is fatal for three species of malaria vectors. The extracts of the fruit are 16 times more potent than those of the roots (see table: Vector enemies).

The plant has multiple medicinal properties and is commonly used to cure asthma, chronic fevers and chest pains.

"Its active ingredient should now be identified and used as a biopesticide," assert the scientists. This could prove to be a viable alternative to current strategies, wherein chemicals are used to control mosquitoes. The plant can be utilised as raw material without any additional economic burden since it is abundantly found in the country. Being an ayurvedic herb, it may also find general public acceptance. Moreover, during application, it would not cause any toxic effects.