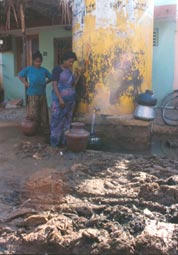 yet another case of contamination of water has surfaced. The southwestern regional office of the Central Ground Water Board (cgwb) recently released a report of the water quality study conducted in 1300 national hydrograph wells (where water samples are monitored) in Karnataka. The concentration of nitrates is found to vary between 0 and 1000 milligrammes per litre (mg/l) -- well above the stipulated standards.

cgwb regional director C S Ramasesha points out that unlike fluorides, the presence of nitrates is attributed to external pollution only. "While the sources of nitrate in urban areas are night soil and municipal waste, human and livestock excreta and agricultural fertilisers that leach into groundwater are the culprits in rural pockets," he says. Poor maintenance of the septic system (tanks, sewer lines) is a potential source of nitrate and bacteria. The alarming results of the report are an indication of the poor state of the city's sewage and sanitary system.

Studies conducted across Karnataka reveal an increase in nitrate content in groundwater over the past five years. Out of the 48 samples collected in Bangalore in 1997-1998, 52 per cent were within the desired levels stipulated by the Bureau of Indian Standards (bis) (0-45 mg/l), 21 per cent were below their permissible limit (45-100 mg/l) and 27 per cent were found to be unsuitable (over 100 mg/l). In 1999, 62 per cent of the samples were in the second and third categories. On the other hand the Bureau of Indian Standard's maximum permissible limit of nitrates in drinking water is 45 mg/l.

"The areas which fall under the unsuitable category are located on the outskirts of the city, where there is no proper sewage system. These places do not receive water from the Bangalore Water Supply and Sewage Board and therefore have to depend on contaminated well water," explains Ramasesha. The nitrate concentration has doubled within a year in north Bangalore, and the contamination level exceeds the prescribed limit of 45 mg/l in more than 50 per cent of the water in the city."More than 10,000 villages in the state have been identified as being affected, but the state has not looked into the source of the problem," says Ramasesha.

"During the past four to five years, not a single case of the syndrome has been registered," reveals Ravi Shankar, resident consultant at Bangalore Children's Hospital and Research Centre. But he adds: "This could be partially because of the absence of diagnostic facilities and lack of awareness among people.