No assurance from China on help for nuclear fuel 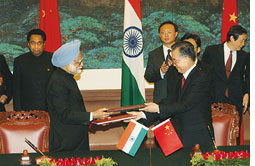 prime minister Manmohan Singh got some support from the Chinese on India's civilian nuclear programme. But Beijing hasn't given any assurance that it will help India get fuel from the Nuclear Suppliers Group (nsg) for its nuclear reactors.

The joint declaration by the two countries talks just about China's support to India's civilian nuclear aspirations and its promise to promote bilateral cooperation in the area. Support from China, a key member of the 45-nation nsg, could ensure an uninterrupted fuel supply to India's reactors. nsg does not supply nuclear fuel to countries which are not signatories to the non-proliferation treaty.

After the visit, Singh said although he sought China's support at both the International Atomic Energy Agency (iaea) and nsg, "the answer I got from both the leaders was that they support cooperation in civil nuclear cooperation with India consistent with their non-proliferation obligations". He added that he had got no definitive answers from China.

Meanwhile, talks with iaea about a safeguards agreement on the Indo- us nuclear deal may not yield the desired result. The Indian delegation which held discussions with the iaea team in the third week of January wanted an assurance from the agency on a steady supply of nuclear fuels, something to which iaea is yet to agree.