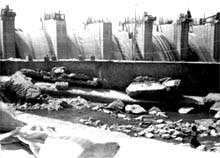 The Supreme Court (SC) has turned down for immediate consideration, pleas by the Union Government and the state of Gujarat for permission to increase the height of the Narmada dam from the present 81.5 metre (m) to 85 m. The SC declined to entertain two applications placed by the latter, after the Madhya Pradesh (MP) government strongly opposed the pleas.

"If the dam height is permitted to go beyond 82.5 m, it would become a fait accompli for the state of Gujarat to increase the height to 132.68 m as had been proposed by the Prime Minister H D Deve Gowda," senior counsel K Parasaran contended on behalf of the MP government. He pointed out that if the dam height was increased to 85 m, the engineering problem inherent in the construction of the dam would necessitate the height being increased to 132.68 m.

The entire matter of the Narmada dam controversy was listed for urgent hearing to March 31. Earlier, the application filed in the petition by the Narmada Bachao Andolan, challenging the construction of the dam on the Narmada river, was dismissed by a three-judge bench comprising Justices J S Verma, S P Bharucha and K S Paripoornan.