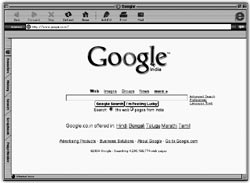 This fortnight saw another twist in the web search company Google's saga of going public with its shareholding. The company decided to stop short of filing a formal registration to sell shares. Behind the decision lay the realisation that Google would be forced to disclose basic financial details of its operations under us laws.

The public offer, when it does materialise, is predicted to generate more than us $25 billion for the company that has recently been in the news for its secretive methods and questionable advertising policy. Only five years into business, Google generates an astronomical us $1 billion in revenue annually, according to the New York Times.

Speculations over Google's plan escalate as it faces growing competition. Its former business partner and investor, Yahoo, has recently entered into direct competition with Google. Meanwhile, Microsoft, the world's largest and most powerful software concern, is expected to attempt a service that competes more directly with Google. What has got all these companies fighting for the best web-searcher slot is the revenue that Google has been able to generate through its advertising technique. The technique along with with Google's gmail services has raised the hackles of many consumer groups such as Google watch.