For polluting QingQi rickshaws in Peshawar 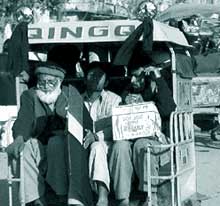 qingqi (pronounced as ching chee) rickshaws are the latest addition to the unorganised public transport system of Peshawar, the capital of Pakistan's North West Frontier Province (nwfp) . These polluting vehicles have grown substantially in numbers in nwfp in the past one year despite a ban on their registration in Peshawar and Mingora, the province's two main cities where the QingQis mainly trundle. Their unchecked growth is not only a pollution menace but also provides wealthy contractors with more opportunity to exploit poor drivers.

A QingQi rickshaw comprises an iron and fibreglass cart with a seating capacity of six, driven by a motorbike with a two-stroke engine. nwfp 's Environment Protection Agency opposes QingQis because their engines produce poisonous carbon monoxide (co) gas , especially bad for lungs and the brain. As it is, the air quality of most urban centres of the province has deteriorated alarmingly due to vehicular traffic and industrial pollution. QingQis had also faced opposition from the traffic police on the ground their design was unsafe and the already existing congestion. Subsequently, their design was improved. "The vehicle is not dangerous any more, after the local assembler improved QingQi's centre of gravity (the point where the cart links to the motorcycle), in accordance with our specifications," says a local traffic police official. However, this could not earn the QingQis the government's approval.

But this means little because the government has been unable to enforce the ban on QingQis, despite the Pakistan Environmental Protection Act, 1997, and the well-defined National Environment Quality Standards. "A crackdown on them (QingQis) would only add to unemployment and might add to an already long list of criminals," reasons an official of the excise and taxation department.

According to a World Bank survey, nwfp has the maximum number of people living below the poverty line in Pakistan. QingQis, along with over 6,000 mini buses, 2,000 wagons, hundreds of cabs and about 10,000 auto-rickshaws run by the private sector in Peshawar, provide much-needed employment. But all the money actually goes to contractors who own them and provide them to poor drivers on rent. "After working 10 hours a day, six days a week, my average monthly income comes to about us $42. I pay a daily rent of us $2.2 to the contractor," says Shams-ur-Rehman, a QingQi driver. The government's leniency towards QingQis has also compromised its policy on traditional auto-rickshaws with two-stroke engines, which it wants phased out. It promotes auto-rickshaws with four-stroke engines. QingQi drivers say the government should create special funds for them to obtain easy loans for switching over to auto-rickshaws with imported four-stroke engines that cost more than us $2,521.