No flight of fantasy

In the works, micro aircraft that fly like a locust 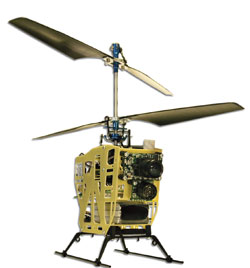 LOCUSTS must judiciously use energy to fly long distances on little food. Scientists have for long wanted to understand how their wings work. They were not able to because locusts flutter their wings too fast. Several inconclusive attempts laters scientists decided locusts must be defying the laws of aerodyna - mics. A recent study has shown that is not the case; they too are conformists. The study also helps understand the flight of other insects, but locusts are unique because they fly using four wings that interact with one another. This revelation makes room for engineers to be more flexible with their designs that can twist, turn and bend like an insect. If not wings, they can make more efficient micro aircraft. A team of engineers and zoologists in Australia and the UK had in mind purposes more noble: small flying vehicles to find survivors of calamities, study environmental disasters, detect landmines and, perhaps, act as a gizmo for espionage. But the inability to study the shape of locust wings in motion, which seemed quite complex, was an obstacle to better miniature air vehicles or MAVs. The team let loose the insects in a wind tunnel, with high-speed digital video cameras to record their movements. With the information, they created a computer model, which recreated the airflow and the thrust the movement of wings generated. The movement on the film was matched to that of the model. This validated that modern aerodynamics can accurately model the insect’s flight. There is little information on locusts’ flight—what it does when it meets unpredictable conditions, wind gusts, for example. This limited application. “Understanding this is a major motivation for such studies,” said Wei Shyy, chair of Michigan University’s department of aerospace engineering in the US.

The computer model allowed the researchers to play around with various components of the wing, figure out how they work, and study how the flexible wings propel insects through the air. When flat plates were used in the model, the efficiency reduced 50 per cent. “The message for engineers working to build insect-like micro-air vehicles is that the high lift of insect wings may be relatively easy to achieve,” said John Young from School of Engineering and Information Technology, University of New South Wales, Australia. “If the aim is to achieve efficiency that enables inter-continental flight in locusts, the details of deforming wing design are critical,” said Young. He is lead author of the paper published in the September 18 issue of Science. “The study shows the benefit of wing twist during forward flight using fluid dynamic models of locust. Though we knew wing twist and camber are important this was not quantified before. This paper improves our understanding of forward insect flight,” said David Lentink of Experimental Zoology Group, working on micro helicopters at Netherland’s Wageningen University.

How about micro helicopters?

Lentink pointed out there is no real use in building a flapping micro air vehicle unless the idea is to make it look inconspicuous. Micro helicopters are much more efficient and can fly longer missions than flapping micro air vehicles. In July 2009, a team of engineers said nature is not very efficient. They found a spinning fly wing generated the same amount of lift as a flapping fly wing while consuming only half the energy to keep the wing moving. This is because flapping wings waste a lot of energy accelerating the air back and forth. Young acknowledged that engineers should not mimic nature for the sake of it, and there were situations where people could do better than nature. The best method would certainly vary depending on the situation. Are locusts the best model for studies on aerodynamics is another grey area. Unlike dragonfly, fly, bee and wasp, locusts are not very impressive fliers, said Lentink. “But locusts fly using four wings that interact with each other,” said Jim Usherwood of Structure and Motion Laboratory, Royal Veterinary College, London. “This makes locusts exciting to study.”