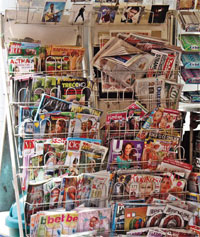 The Macedonian government’s plan to regulate the work of foreign media and distribution of foreign information has come under strong criticism both at home and abroad.

The controversial parts of the law on the import and distribution of foreign press and dissemination of information, which was discussed in the parliament in early March, are the foreign minister’s discretionary right to revoke foreign press accreditation and a provision about polls on current affairs, which is ambiguously explained in the draft law. Some of those who have read the law say the polling clause could be interpreted as referring to a journalist conducting a simple “vox pop” on the street, asking ordinary people about their opinion on current affairs.

Macedonia’s Justice Minister Blerim Bedzeti said the updated draft of the law would address all the unclear “technicalities”. Olivier Basille of the Paris-based organisation Reporters Without Frontiers said it was unusual for an EU hopeful to target foreign media. “It should consider the EU press as part of its own.”