Numerous factors, besides nearness to the Union Carbide plant, affected the victims of Bhopal gas tragedy 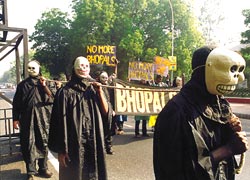 distance from the poison-producing plant was not the only deciding factor. Unlike what previous research would have us believe, the adverse health effects resulting from the Bhopal gas tragedy cannot be assessed only on the basis of how near the victim lived to the Union Carbide plant. Several other factors -- the duration of the exposure, type of houses, the environment and vegetation around the area of residence, and the victims' physical activities at the time of the tragedy -- played an important role in influencing the level of impact on their health.

These were the findings of the third phase of a study being conducted by the International Medical Commission on Bhopal (imcb) since 1993. imcb is a consortium of many researchers from across the world. The first two phases of this study showed that the victims' morbidity decreased with increase in distance of the residential areas from the plant.

During their study, researchers studied 1,618 residents of Bhopal. Following earlier research patterns, the population was stratified by distance of current residence from the Union Carbide plant. They selected four exposure zones, each two kms in length, along the line of the gas dispersion from the plant. Individual exposure levels were calculated after extensive interviews with the subjects and in-depth clinical investigation. The researchers also analysed the subjects' responses to standard questionnaires.

After comparing the total exposure index with the distance factor, the researchers found that exposure was not linked to distance alone. While there was a strong association between total exposure and shortness of breath, distance was associated with all respiratory symptoms. Both total exposure and distance indices indicated adverse lung function, but the total exposure index showed a higher risk factor for these problems. The researchers say that the tragedy was followed by higher incidence of asthma, wheezing, cough and shortness of breath in the city. Among non-respiratory symptoms, elevated prevalence ratios for loss of appetite and fever were observed.

The researchers say that this study is the first attempt to estimate individual exposure, calculated on the basis of varied factors. They opine that more studies, involving larger number of subjects are required. This, they say, is the only way that individual exposure estimates can be made accurate. Effective analysis of individual exposure is important if the victims are to be provided with justified compensation.