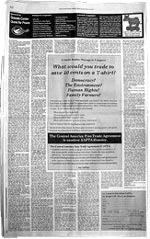 Is the Central American Free Trade Agreement (cafta) a laughing matter? A two-minute flash film against the trade pact, which was signed between usa and five Central American countries on May 28, 2004, certainly thinks so. cafta -- The Trojan Calf says the agreement has been presented to Central America as a gift, but like the Trojan Horse, it's really a vehicle for American corporations to secretly invade new markets. A city in Central America finds a Trojan Calf outside its gates, doesn't listen to cries of "beware against Americans bearing gifts" and brings the calf in. Late in the night, the calf raises its tail and drops MacDonald's, 'Wal Sweat', Walt Disney and other us corporations. The message: cafta is an agreement to bring suffering in Central America and the us.

The Quixote Center, a us-based non-governmental organisation and the film's producer, on May 29, 2004 brought out a full-page advertisement in The New York Times against cafta. The ad, which had the signatures of more than 1,800 people, was put out to make us politicians know: No cafta!

Under the agreement, many us exports of consumer and industrial goods will become duty free in Costa Rica, El Salvador, Guatemala, Honduras and Nicaragua. In return, it is believed, the us market will open up to many products from these countries. But The Lancet, a uk-based health journal, reports that critics from the public health sector say that the agreement's strict intellectual property rights protection will make access to generic medications nearly impossible in the poorer nations. They say that the trade pact gives greater protection to patent holders and drug companies than in other agreements. But drug companies say patent protection is needed to protect investment and fair trade.

The city in The Trojan Calf too had believed that cafta would promote free trade. They were snared. The film says: "another world still is possible. Reject the 'gift' of the Trojan Calf."