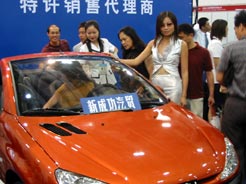 china, one of the fastest growing car markets in the world, is gearing up to impose fuel economy standards for new cars. And it may even go the extra mile in this energy conservation effort -- its norms are expected to be more stringent than those of the us.

The first phase of the new rules will come into effect from July 2005, with the more rigorous second phase being implemented in July 2008. The standards would be based on a vehicle's weight, requiring lighter vehicles to go the farthest on a gallon and giving heavy automobiles some margin. Transmission mode, too, will be taken into account. Thus manual-shift cars would need to cover a greater distance than those with automatic transmissions. In the second stage, new cars in China would have to run at least two more miles (3.2 more kilometres) on each gallon (3.8 litres) of fuel than the average set in the us.

The Chinese rules would also prove to be more stringent because they have been formulated for individual models of cars. As against this, in the us, standards are fixed for fleet averages. Furthermore, all new sports utility vehicles (suvs) and minivans in China would be required to meet the same standards as those for automatic shift cars with an identical weight.

Not surprisingly, the auto industry in China is piqued. It fears that its dream run -- last year, car sales grew by more than 70 per cent -- may come an abrupt halt. All the same, industry representatives have agreed to comply with the new rules.

The move though was expected, given the fact that China depends on imports for one-third of its oil needs. Zhang Jianwei, an official of the agency that sets vehicle standards, said energy security was the overriding factor in drafting the new automotive fuel economy rules.