No haste on waste 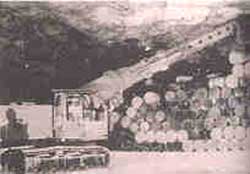 THE Russian Supreme Court's judgement was toud and clear: no to nuclear waste. And claiming a pat on its back was Greenpeace, the international environmental organisation, which had moved the Court on Russian plans to import nuclear waste from the western nations for reprocessing. The landmark judgement was all the more significant as the Court had for the first time struck down sections of a Presidential decree.

Though Russian law prohibits the import of nuclear waste for means of storage, Boris Yeltsin, its President decreed last year that the Gorno- Khimichesky group in Siberia could be allowed imports. Observed Oleg Kuznetsov of Greenpeace that while "temporary storage of spent fuel is not against the law.... there was no procedure to treat the waste". Plans to construct a reprocessing plant were rather vague. Kuznetsov said that the Russian government had wanted to import the waste even before it could take a decision on whether the plant should be constructed. A reprocessing plant would mean that nuclear waste can be imported.