No home, no fungus

Deforestation protects some frogs from a deadly infection

RESEARCH suggests that habitat loss, thought to be a major threat to amphibians across the world, might in some cases be protecting them from a deadly fungus. 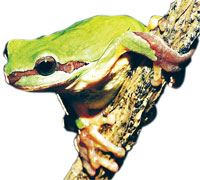 Amphibian species, which include frogs, toads and salamanders, have dwindled at an alarming rate since 1980s; a third of the world’s amphibian species are either threatened or extinct.

A complex interplay of climate change, habitat destruction and disease has long been held responsible for their falling numbers. But there may be another reason for their extinction. Recent evidence turns the blame needle towards a fungus—Batrachochytrium dendrobatidis (Bd), or the Chytrid fungus—which attacks the amphibians’ skin, invariably leading to their death. While there is no conclusive data on where the fungus came from, Guilherme Becker, a researcher on evolutionary biology at Cornell University, US, says “humans are likely to have introduced the fungus to several regions, especially through pet trade.” More than 350 amphibian species worldwide are known to have been attacked by the fungus. There are 6,260 known amphibian species (as of 2007); 158 are known to be extinct.

Becker’s recent study brings out an interesting aspect of the decline—amphibians living in areas that have been disturbed by human activity are less likely to be infected by Bd.

Becker and his adviser Kelly Zamudio noticed, after comparing habitat loss and infection data from Costa Rica and Australia, that frog populations in areas where habitat destruction had taken place were less susceptible to the fungus compared to populations in pristine habitats. The results corresponded with Becker’s field observations at two sites in Brazil. “We selected sites within each landscape with similar climate, elevation, and latitude to avoid potential confounding effects in our analyses. Then we found a strong positive effect of forest cover on Bd prevalence and infection intensity,” says Becker.

The study, published in the May 30 issue of the Proceedings of the National Academy of Sciences, theorises that Bd is unable to thrive in disturbed habitats. But the study does not imply habitat loss is going to protect the frogs in the long run. Becker notes, “Most tropical species are habitat specialists, and can’t tolerate deforestation in the first place. Some habitat generalists may escape infection in disturbed habitats where Bd can’t thrive, probably because these disturbed habitats are hotter and drier which is detrimental to Bd.”